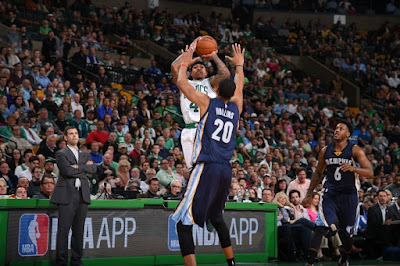 It was a tale of two halves.

After staying within striking distance in the first half, Isaiah Thomas and the Celtics turned a three-point halftime deficit into a double-digit lead with a 24-6, second-half run en route to a 116-96 win at TD Garden on Wednesday.

The 14th straight win at TD Garden gives the Celtics their longest home winning streak since winning 18 straight on Causeway in 1991.

With 7:10 left in the first half, the Celtics were in the penalty and the Grizzlies took advantage by converting 17-of-18 free throws before the break. Memphis also out-rebounded the C's 29-14 and converted 9 offensive rebounds into 17 second-chance points. Mario Chalmers' 3-pointer at the end of the second quarter gave the Grizzlies a 55-52 halftime lead.

Celtics coach Brad Stevens discussed the Celtics' humongous third quarter and the changes he saw in his team after halftime.


I think the biggest thing for us, other than our stops and rebounding, was pushing the ball," Brad Stevens said. "We played at a different pace. [Thomas] and Amir [Johnson] got to the line on the first two possessions of the second half, and [Thomas] pushed the pace the entire time he was in, in the third quarter."

The Grizzlies, a team playing without three of their starters for the second straight game -- Marc Gasol, Mike Conley, Zach Randolph -- came into TD Garden off a win in Cleveland against the Cavaliers.

It doesn't matter how he performs in the first 24 minutes -- Isaiah Thomas almost always gets it going in the second half. After scoring 6 first-half points on 2-of-8 shooting, Thomas single-handedly outscored the Grizzlies, 16-12 in the third quarter. He finished with 22 points to go with 8 assists in 28 minutes.

The Celtics (38-26) will look to make it 15 straight wins at home when they host the Rockets on Friday night.

The C's caught fire from deep in the second half. After shooting 33.3 percent on 5-of-15 first-half 3-pointers, the Celtics finished 15-of-32 from distance and opened up a 22-point advantage -- their biggest lead of the night. Overall, the Celtics shot 47.1 percent from the floor on 41-of-87 shooting.