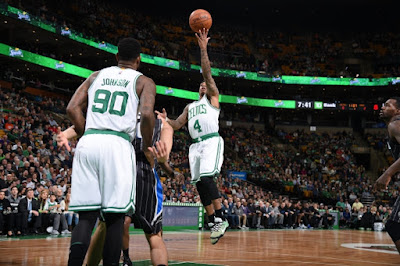 It was a hard fought win at TD Garden.

The Celtics kept their opponent at bay for most of the first half before pulling ahead in a 35-point third quarter on the way to a 107-96 win over the Magic.

Victor Oladipo scored a team-high 25 points and grabbed 8 rebounds, Evan Fournier and Aaron Gordon each scored 13 points for the Magic.

After a sloppy first half, the Celtics got their fast break offense going in the second half and finished with 29 fast-break points -- two points shy of their season-high (31). The Celtics took advantage of Orlando's slow transition defense where they were able to get to the rim and score. The C's scored 54 points in the paint and held the Magic a 41 percent shooting percentage.

Marcus Smart and Kelly Olynyk were the only Celtics who scored off the bench but thanks to Olynyk's 22-point night, it was enough to beat the Magic. Olynyk was on fire. He shot 58 percent on 7-of-12 shots, including 4-of-6 from downtown. Olynyk played solid defense against Orlando's big men -- he finished the night with 2 steals and pulled down 5 rebounds in only 22 minutes.

Plus, Amir Johnson's effort certainly didn't go unnoticed against the Magic. He was another Celtics big man who defended and scored in and around the paint against Orlando. Johnson's 11 points and 11 rebounds was accompanied by 3 blocks on the defensive end in 34 minutes of play.

With 2:49 left, Oladipo's jump shot trimmed the Celtics' double-digit lead lead down to four before Bradley and Thomas single-handedly outscored the Magic 9-2 to cap off the win.

The Celtics (41-30) are now tied with the Hawks for fourth place in the Eastern Conference. They will have a huge opportunity to move up in the standings when they host the Raptors at TD Garden on Wednesday. It will be their final home game before their five-game west coast road trip.

The Celtics continue to improve their free-throw percentage. They shot 83.3 percent from the line on 20-of-24 shots -- marking the fourth straight game where the C's shot 83 percent or better. Celtics are shooting 79 percent on the season, they're currently ranked fifth in the league.