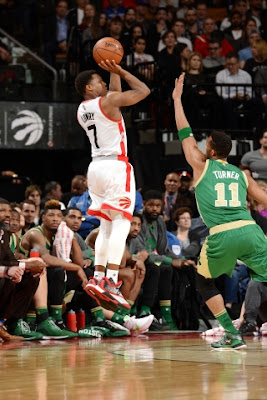 For the second straight game, the Celtics never led once and surrendered another double-digit loss.

Kyle Lowry and the Raptors led the Celtics for 48 minutes and cruised to a 105-91 victory at the Air Canada Centre on Friday. Celtics (39-30) have now slipped down to sixth in the Eastern Conference.

Lowry scored a game-high 32 points, Luis Scola added 17 points and DeMar DeRozan chipped in 15 points, 7 rebounds and 6 assists for the Raptors. Isaiah Thomas (20 points) and Evan Turner (12 points) were the only Celtics who scored in double figures.

The Celtics trailed the Raptors, 30-14 after the first quarter and played catch-up the entire night. Scola scored all of his 17 points in the first 12 minutes for the Raptors and by halftime the Celtics only shrank their deficit to 14, 55-41.

Celtics coach Brad Stevens went deep into his bench in the second quarter in an effort to spark his team's offense and for some low-post defense. All three rookies checked in -- Terry Rozier and R.J. Hunter added scoring and Jordan Mickey came in for defensive and rebounding purposes in the first half.

In the third quarter, the Celtics found their offensive rhythm. Led by Thomas and Turner -- who combined for 18 points, the C's outscored Toronto, 33-24 before the fourth quarter and cut their deficit down to five.

However, the Celtics didn't take care of the ball at the start of the fourth quarter -- committing six turnovers in five minutes and the Raptors took advantage. The Raps went on a 14-2 run and leaped out to a 17-point lead, 93-76.


"The best we've played in two weeks is the third quarter," Brad Stevens said. "We can build off that. I think it was more of a factor of being hesitant than it was about not coming out and playing or competing or any of that stuff. I think that, for the most part, we looked hesitant. We looked unsure of ourselves and that type of stuff."

Lowry capped the Raptors win by scoring 15 of his 32 points in the final frame. He finished the night 9-of-14 from the floor, including 5-of-8 from deep as Toronto have now won three in a row and six of their last seven games.

The C's will get a chance to avenge their loss next Wednesday when they host the Raptors at TD Garden.

Celtics won't have much time to dwell on Friday night's loss, they will head to Philadelphia on Sunday to face the 76ers before heading home on Monday to host the Magic.

Fast break points and outside scoring helped the Celtics crawl back from their double-digit deficit but committing six fourth-quarter turnovers sealed their fate. Celtics shot 43 percent from outside on 9-of-21 treys while scoring 21 fast-break points. But the Raptors shot 48 percent from the floor and Kyle Lowry was no match for the C's down the stretch.