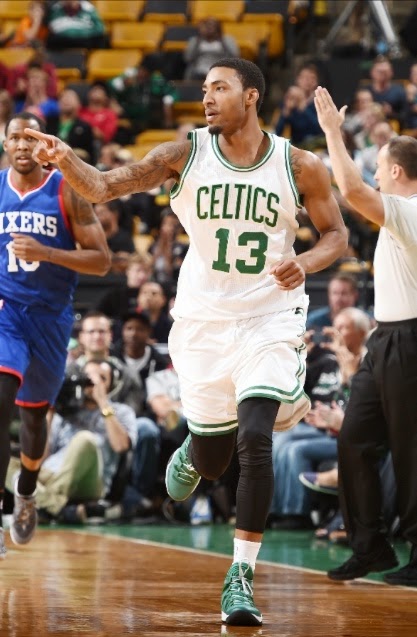 The growing pains continue for the former Kentucky Wildcat and 13th overall draft James Young. The swingman strained his left hamstring before the Celtics preseason opener on Monday. One would say ' things like this happen all the time, no big deal,' right? But in this case, the rookie just so happened to not inform anyone of his injury.

As Steve Bulpett; of the Boston Herald first reported, Young did not tell anybody that he had tweaked the hamstring. This type of injury when gone untreated or ignored can make matters worst. In this case the 19-year-old decided to not only keep it to himself but he also played 20 min in Monday night's 98-78 win over the 76ers. He went on tho score 10 points, feeling good about his play until the next morning.

After significant pain on Tuesday before practice, the rook couldn't keep quiet anymore. Young caught everyone by surprised when they had learned of his situation, and questioned why he had taken almost two days to say anything?

"We had no idea," said Brad Stevens. "In fact, he didn't say anything until Tuesday. So I don't know if it was something that was wearing on him, but none of us knew." [Boston Herald]

Young sat out Wednesday night against the Knicks and will not play tonight when the C's take on the Raptors.When asked of how the injury occurred the 6'6 wing said

"I was stretching before the game [Monday]," explained Young. "I felt a few pops in my leg. But it was nothing serious. I just wanted to go out there and play. I didn't really feel it until the second half. During halftime I put some heat on it, kept playing. I was going off adrenaline, so I really didn't feel it." [Boston Herald]

Any athlete, especially a young one (no pun intended), wants to play and over look minor injuries. With Rajon Ron (left hand fracture) and Jeff Green (calf) sidelined, James Young was looking to make an impact during the first preseason game of his NBA career. A coach like Stevens can appreciate Young's desire to make an impression.

"Sometimes you're playing through that adrenaline, said the Celtics coach. "Sometimes it doesn't feel as bad in the moment and you can just kind of play through it. Then he sleeps on it or wakes up the next day, you've just got to be really be careful with muscular stuff, just because those can be really lingering and nagging." [Boston Herald]

Young believes he will be back sooner rather than later, even though his coach listed him as 'week-to-week' instead of day-to-day. A positive spin on an already trying four months for the rookie, who had suffered a mild concussion back in June due to a car accident and was unable to participate in any summer league games. This little bump in the road is nothing he feels he can't handle.

"It's kind of a minor setback," Young said. "As soon a I get back out there, I feel like I'll be good and get right back in the flow of things. It's kind of frustrating, but I mean stuff happens. So I'm going to go out here and just watch." [Boston Herald]

In the meantime the Celtics can only hope that Young uses this experience as a tool for any future mishaps concerning injuries and letting the training staff know whats going on ahead of time.

"Hopefully it's a good lesson for him and us," said Stevens. "He needs to communicate that ASAP if he thinks something is not feeling right." [Boston Herald]

As for the message reaching the first year pro on taking chances with injuries.