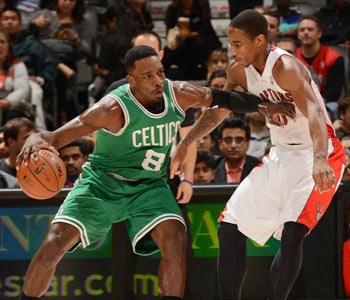 Celtics nation finally get to see Uncle Jeff back in the lineup. After missing nine days with a strained left calf, Jeff Green returned to practice on Monday.  He's set to start tonight in his preseason debut against the Raptors in Portland, Maine.

“I thought he did fine. I’ve got no reports otherwise, so I’m assuming he’s going to be ready (to play),” coach Brad Stevens said on Green's last two full-practices. “No talk about limiting minutes, other than we haven’t played anyone what I would consider to be normal minutes yet. [Wednesday] will be part of his conditioning.” [Boston Herald]


Evan Turner filled in at small forward while Green was nursing his injury sustained during the team's open scrimmage on October 3. The swingman is averaging 12 PPG, 6 RPG and 4.3 APG over the last four preseason games, and you could argue that he's been the best player for Boston up to this point. Now that the Celtics' leading scorer from last season has returned, Stevens has to figure out how both Turner and Green can coexist moving forward.

"Jeff's going to play most of his minutes or maybe just over half of his minutes at the 3, but he'll also play some 4, said the Celtics coach. "I think Evan has to play. Whether that's starting or coming off the bench or whatever. Evan can get into the paint and that's huge, critical thing for our team." [Celtics.com]

Once Turner and Green are on the floor together at small forward and power forward respectfully, the duo can make plays for themselves or set up their teammates. Green believes the duo will be hard to defend and will become one of the team's advantages over opponents.

"I think we can work together very well," he said. "We can both handle the ball. We both can create mismatches on both ends. So I think it's to our favor." [Celtics.com]

The two can play multiple positions from one through four. Initially other teams will have to prepare to guard a couple of slashers at the forward spot in Green and Turner plus two guards that can get to the basket at any given time in Bradley and Rondo (or Smart). Jared Sullinger weighed in on having so many options on the court at one time now that Green is back.

"It gives us another threat," said Sully. "We have a lot of threats as it is, with E.T. (Evan Turner), Marcus (Smart), Avery (Bradley). You add Jeff and a couple of weeks from now you add Rondo, and you never know." [Celtics.com]

Sullinger also spoke on having both Green and Turner in the lineup at the same time and how their versatility will be fun to watch.

We will get to see a sneak peek of the combo tonight as Boston will face Toronto for the second time in four days. It should be interesting for the Celtics coaching staff, who probably have been waiting to run plays for the wings ever since the start of training camp. The fun tips-off at 7:30 on CSNNE.