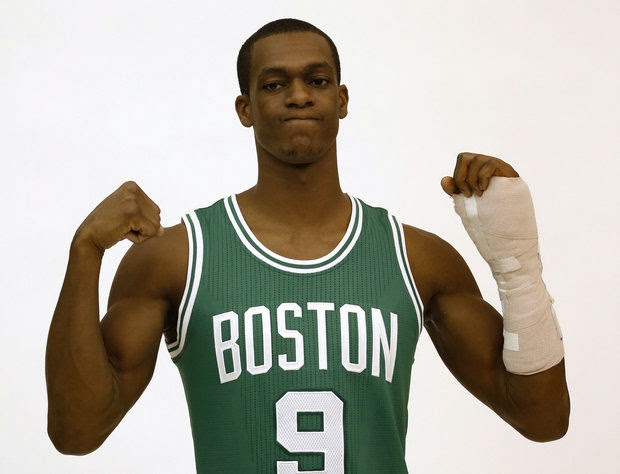 Rajon Rondo broke a bone in his hand, had surgery, wears a cast on his arm, but still wants to be in uniform and ready to go for the start of the season.

In a recent interview with CSNNE's Mike Gorman, Rondo said he hopes that his hand heals soon and that he doesn't want to miss any games this season.


"They're telling me six to eight [weeks]. But that means nothing to me," Rondo said, when asked how long will he be out for. [CSNNE]


Gorman then asked if Rondo would be a possibility for Opening Night.

Rondo, who hasn't been healthy for the start of a season since 2012, will miss training camp and probably the October 29 game against the Brooklyn Nets. But can't say we don't like his wishful thinking.


"Hopefully I won't miss any games this year," Rondo said. "Lord willing I heal correctly and I'll be back in no time."

The Celtics captain, who is in the final year of his contract, has a lot to prove this season. He showed glimpses of his old self in 30 games last season (averaging 11.7 points, 9.8 assists) but hasn't been able to stay healthy. It's no secret that there are Rondo doubters out there who don't think he's the right player the Celtics can build a team around. This makes the 2014-15 season that much more important for the Celtics point guard.


"I'm just anxious to get back out there on the court and show what I can do," Rondo said. "I know this isn't a championship team, but we're going to go out there every night and play hard."

Celtics begin their preseason schedule next Monday at TD Garden against the Philadelphia 76ers.