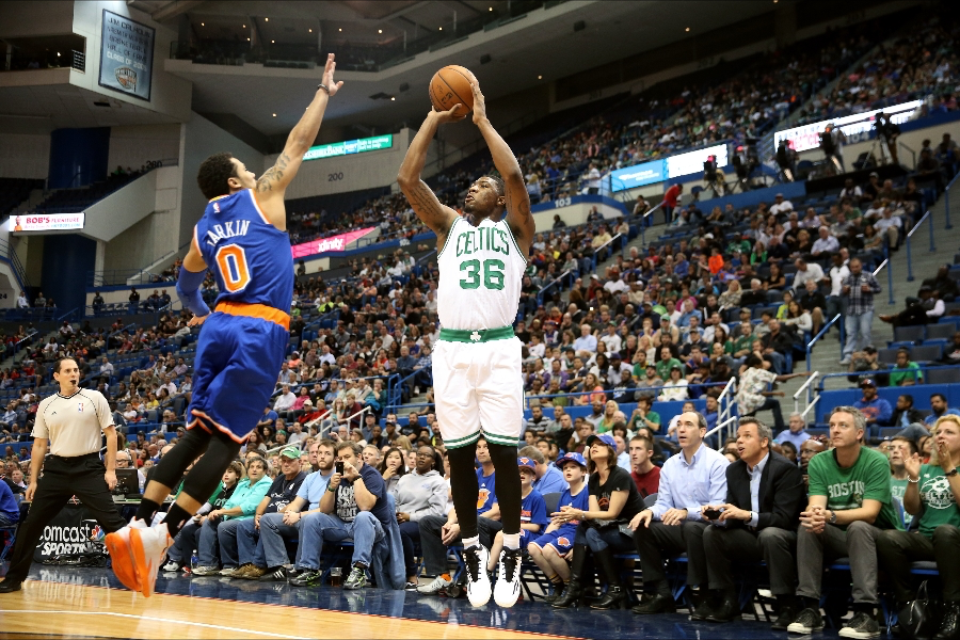 Hartford - It was the same story of great defense, plus some much better shooting that gave the Celtics a 106-86 win over the Knicks on Wednesday night. Even though the XL Center was split with both New York and Boston fans, the C's were technically considered the home team in another 20-point victory to go 2-0 in the young preseason.

Jared Sullinger led all scorers with 23 points (9-of-12 shooting from the field) including making all three of his 3-point attempts, while grabbing 5 rebounds in 23 minutes of action. Celtics rookie Marcus Smart got his second consecutive start as his shooting improved vastly from Monday night; going 4-of-8 (2-of-4 from the 3) adding 11 points, dishing out 6 assists and hauling down 4 rebounds. Marcus Thornton also chipped in with 12 points and 3 steals in his 20 minutes off the bench, as five players finished in double figures in the win.

For New York no one played anymore than 21 minutes in their preseason opener. In Derek Fisher's coaching debut with the triangle offense; Carmelo Anthony finished with 10 points on 3-of-9 shooting and Tim Hardaway Jr. led Knicks with 18 points in the lost.

Boston got their offense going early after only shooting a mere 34 percent two nights ago. This time around the Celtics converted nearly 50 percent of their shots (48.8%), including going 11-of-22 from behind the arc. Brad Stevens spoke about his bigs Sullinger and Kelly Olynyk being the main reason for the spike in the team's shooting percentage.

"I thought we shot it a little bit," said the Celtics coach. "We went on a great string of shooting today. I think shooters are going to make shots and that's why I'm not going to get too high or low based on what they are shooting right now. One of the strengths is our bigs' skills, so we're going to have to roll with that. There's going to be some disadvantages in the post and those are the type of things, we're just going to have to figure them out." [ESPNBoston.com]

Sullinger and Olynyk (12 points, 4 rebounds) both combined on 6-of-8 shooting from 3-point land and ended up with 35 of Boston's 106 points.

The Celtics defense forced 28 New York turnovers into 33 points (14 fast break points). Through the first two exhibition games the C's have forced Philly and the Knicks to turn the ball over 56 times. It's just a quick glimpse into the defensive minded team fans hope to see this season. 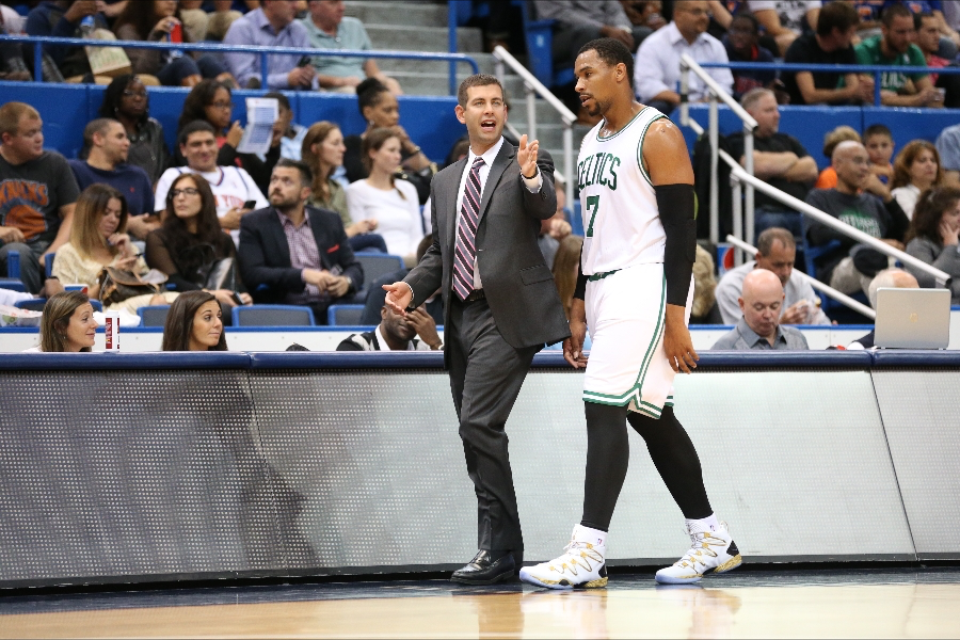 When the Knicks put up their white flag and both teams subbed their training camp invitees, the Celtics still maintain their defensive pressure. Rookie big man Dwight Powell and Tim Frazier each had two steals to ice the game in the closing minutes.

"Our defense didn't really stop," said Stevens. "I thought Marcus Thornton played a great defensive second half. I thought that our bench came in and just kept guarding. I thought Tim Fraizer and Rodney McGruder and Dwight Powell did a lot of good things defensively." [ESPNBoston.com]

The Celtics will head north of the border when they take on the Raptors on Friday night and head back to Connecticut on Saturday to take on the Knicks once again at Mohegan Sun. Say what you will about these first two wins, but it's very clear what's been the main focus of this year's training camp; defense first.

"Everybody that played [tonight] defended," said Stevens. "That's part of the emphasis right now, to play that way. And to get back and play that way."

Besides Rajon Rondo being out due to his left hand fracture, Boston was without Jeff Green, who missed his second straight exhibition game due to a minor calf injury suffered in last Friday night's scrimmage. He is listed as day to day. James Young also did not see any action because of a hamstring strain, it is unknown when he will return. Vitor Faverani still remains sidelined and is set to have another MRI on his surgically  repaired left knee.


Joel Pavón
Posted by SeanDutra at 2:55 AM