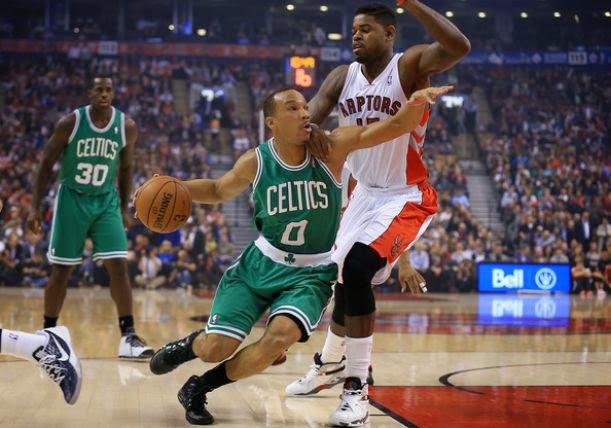 Toronto - After back-to-back blowout wins against the Knicks and 76ers, the Celtics faced their toughest opponent thus far, and suffered their first defeat of the preseason.

Celtics were in control for three quarters before the Raptors went on a 29-16 fourth quarter run, sealing a 109-116, Toronto victory.

Bradley was impressive, scoring 22 points on 9-15, including 4-5 from behind the arc in 20 minutes. 20 of his 22 points came in the first half. But unfortunately, Avery's night came to an end in the third quarter when he suffered a foot injury and never returned.


Bradley's partner in the backcourt, Marcus Smart, scored nine points to go with his seven assists. Despite committing three turnovers, Smart handled most of the point guard duties in 30 minutes of play.

Marcus Thronton shot the ball well, scoring 19 points, including 4-6 from three. He has continued to be a good offensive spark from the bench throughout all three preseason games. Brandon Bass also contributed, scoring 14 of the bench's 48 points.

But the offense wasn't to blame in this loss. Celtics' defense against the Raptors struggled mightily, especially in the first half. Raptors scored 60 points before halftime. And were hot from three, they shot 7-11.

Two of Toronto's best scorers, Kyle Lowry and DeMar DeRozan, chipped in with 18 points a piece. The Raptors also got a big hand from their bench; a combined 48 points. Patrick Patterson led the reserves with 17.

But for a young team that's missing their two best players, Rajon Rondo and Jeff Green, this was a good test for the Celtics. Evan Turner, 25, was the oldest player in last night's starting lineup alongside Smart, Bradley, Olynyk and Sullinger. Raptors, the returning Atlantic Division champions, will play the Celtics five more times, making them a good measuring stick throughout the season for the Celtics.

Celtics continue their preseason schedule tonight in a rematch against the Knicks at Mohegan Sun.