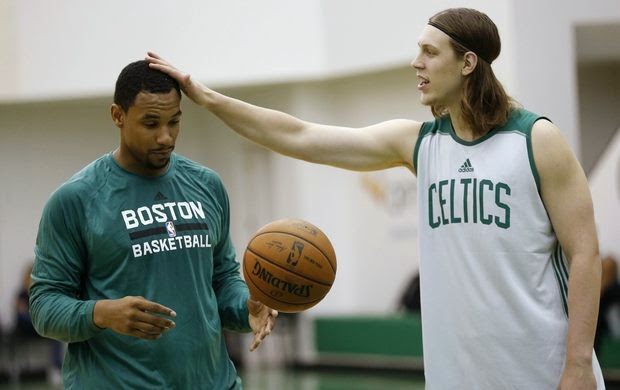 The Boston Celtics showcased their talents in front of season ticket holders and the media at their annual intra-squad scrimmage last night at the TD Garden.

In two 12-minute quarters, those in attendance got a firsthand look at the 2014-2015 Celtics roster. Celtics big men Jared Sullinger, who was on the Green team, and Kelly Olynyk, who was on the White team, got things going early in the scrimmage. Olynyk scored nine of the White team's first 15 points which led his White team to a, 33-17, victory.

After the scrimmage coach Stevens told the media that he has an idea of who his best 10 players are but is still figuring out his lineups.


"I think that I've got a pretty good idea about who the top 8 to 10 guys are right now," said Stevens. "But how they all fit -- starters, subs, and who complements who -- I'm still feeling out. It's a lot like, there's some guys that are clearly in our best offensive lineup, there are other guys who are clearly in our best defensive lineup, and there's probably going to be some mixing and matching" [ESPN Boston]

Sullinger chipped in with a display of three-pointers for his Green team. He also did a good job scoring the paint. Sullinger looked like he may have knocked off a few pounds over the summer. Which is impressive considering what Sully told reporters at Media Day that he hasn't even stepped on a scale at all this past summer.

In the second 12-minute quarter, Jeff Green was forced to leave with a left calf strain. Hopefully the injury isn't too serious and we'll be able to see Green play in next week's preseason games. Green scored for his Green team with a few drives to the hoop before leaving.

One rookie looked sharp last night, and the other, eh, not so much. Celtics' 17th overall pick James Young shot the ball well from the three-point arc, including a rare four-point play. Rookie Marcus Smart handled point guard duties for the White team and at times looked flustered throughout the scrimmage. He also had a tough time guarding his opponent Evan Turner.

Of course an intra-squad scrimmage in October isn't going to mean a lot by mid-season when we'll have a better understanding of what this team is, but last night's glance gave us a sneak peek into what we can expect to see throughout the preseason. Expect to see a lot of lineup combinations, obviously and we'll see coach Stevens slowly start to figure out what fits and what doesn't.

Rajon Rondo was in attendance last night alongside Danny Ainge. It's always a great sight to see the two joking around and observing together.

Celtics tip off their preseason schedule against the Philadelphia 76ers Monday night at TD Garden.