Sullinger shining in preseason so far 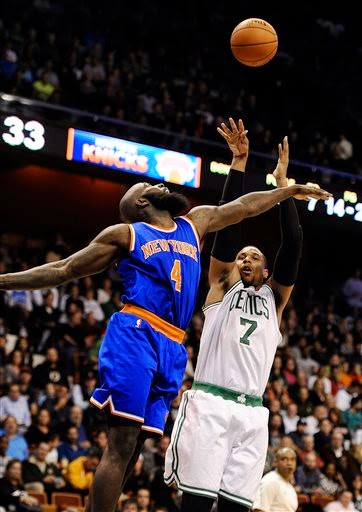 For a young rebuilding Celtics team who's without their two best players, Rajon Rondo and Jeff Green, it's encouraging to see a promising big man play at such a high level.

Jared Sullinger has been the best player on the floor throughout these four games, showing overall growth as an NBA player.

After four games, Sullinger is averaging 21.1 points, 12 rebounds and 4.7 assists. Although his stats are only throughout four preseason games against teams in the NBA's worst division, we could be watching a sneak peak of Sullinger's upcoming season.

Sullinger, who is entering his third season, has been battling injuries throughout his short NBA career. After he was reportedly flagged by several teams for back issues, the Celtics were fortunate in drafting him 21st in the 2012 NBA Draft. He ended up missing the second half of his rookie season due to a back injury, and then suffered a dislocated right index finger last season.

"That kind of hurt my jump shot tremendously due to my follow through. I was following through with my middle finger instead of my index finger," Sullinger said. "Now with that being healthy, I think I'll be okay." [MassLive.com]

Although not everyone was thrilled to see Sullinger shooting the three-ball last season, his follow through has looked a lot better this past week. He's been showing confidence in his three-point shooting, going 7-for-12.

But don't let his three-point shooting fool you into thinking he hasn't been battling down low. He's also been scoring in the paint and grabbing rebounds. In reality, this upcoming season hasn't even started yet but seeing Sully in this form gives Celtics fans a reassuring feeling.

Also, Sullinger shooting threes may not be the worst thing in the world. If he's shooting three-pointers, it's a good way to open the floor for players like Rajon Rondo and Jeff Green who like to drive to the hoop. And if players such as Avery Bradley and Marcus Thornton are able to score from downtown the way they have this past week, it will definitely help the offense.

But don't get me wrong, I still cringe when I see him shooting threes but as long as he's combining that shooting with moves down low then it doesn't bother me too much.

Celtics continue their preseason schedule Wednesday night at Cumberland County Civic Center in Portland, ME against the Toronto Raptors.
Posted by Josue Pavon at 12:01 PM