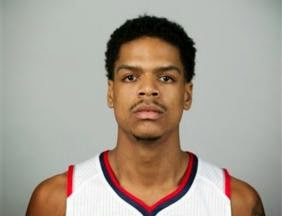 The Boston Celtics currently have 16 guaranteed contracts on their roster. With only five days left before the start of the regular season, Danny Ainge decided to make an addition instead of trimming down to the NBA max of 15-players.

Ainge announced on Friday that the team had claimed 6'7 swingman Jarell Eddie off of waivers. The rookie forward had previously been cut by the Atlanta Hawks a few days ago. This gives the front office an opportunity to have a look at this new prospect through the weekend before deciding to either keep or send him to the Maine Red Claws.

The Celtics now have 17- players, and while teams can assign up to four training camp invitees to their D-League affiliate and not have it go against their main roster spot total, it is unknown what the C's next move will be.

Will Bynum still remains influx, Ainge is looking to either trade or waive the point guard, who was acquired a week ago from the Pistons in exchange for Joel Anthony.

Besides the D-League, Eddie more than likely will have the option to play overseas as well.

"We're going to evaluate him before training camp ends," said Ainge. "He wont learn our stuff quick, but we'll put him through some workouts after practice and just evaluate him over the next couple of days." [CSNNE.com]

Jared Sullinger, who has known Eddie since high school offered a quick scouting report on the rook. The two played against each other during their AAU days and also attended a few Nike basketball camps together.

We will keep you posted on any future plans with this last minute pick up, Ainge has had his eye on him for quite a while.