Eastern Conference Preview: How the Celtics Stack Up 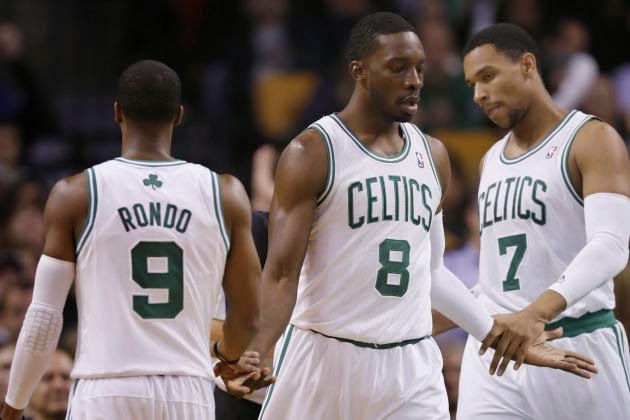 It's no secret the NBA is dominated by the depth and talent out in the Western Conference. The Celtics have benefited from the lack of Eastern Conference depth in the past.  The post Michael Jordan years and pre-LeBron domination years of the Eastern Conference were very generous to the up and coming Celtics at that time.

From 2001 to 2005 a team led by two young inexperienced all stars in Paul Pierce and Antoine Walker were able to make the playoffs four consecutive years, and also earn a trip to the Eastern Conference Finals.  They benefited so much so from a weak Eastern Conference from 2003-2005, that both seasons they would have been left out of the playoffs in the West, including 04-05 when they won the Atlantic Division with a record of 45-37. They would have been tied for 8th that year if they played in the West with the Memphis Grizzlies. Not to take anything away from those Celtics teams, but it definitely sped up the rebuild process during those years.

I bring up the old times however to preface the current state of the Eastern Conference and the Celtics. The Eastern Conference, after the top 2-3 teams, is going to be pretty wide open again this year. So that opens the door for the Celtics to maybe even squeak into one of the last two seeds in the Eastern Conference. That overall would be viewed as an extremely successful year, as the Green are stuck in year two of a major rebuild, but I'M SAYING THERE'S A CHANCE! 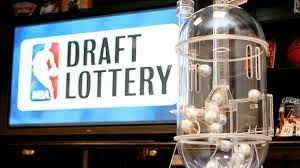 These teams should look familiar in the basement of the Eastern Conference if you watched any NBA basketball last year. These teams are your typical tankers and none of them, even with the addition of Jabari Parker, Joel Embiib, and Aaron Gordon through the draft, will be able to make the leap out of the Draft Lottery in 2015. The Celtics were in this same class of teams last year but this year they seem to be much more equipped to climb those cellar stairs.

The 76ers seem to be on a layaway plan with their first round big men.  Last year they traded for injured Nerlens Noel on draft night, and this year repeated that same feat drafting the injured Joel Embiib. Noel will make a run at Rookie of the Year this year, but  Embiib most likely won't see a nip of action. They do still have last year's ROY; Michael Carter Williams, but the rest of the roster is awful enough to induce projectile vomit from the balcony. I did not even know Jason Richardson was still in the league never mind relied upon to be the veteran presence on this group of D-League All Stars. 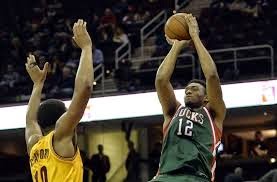 Milwaukee could be a team to watch out for if Jabari Parker explodes on the scene but I still think they would be a few players away from the playoffs. While Orlando has some depth but is lacking any type of superstar and should not be a problem for the Celtics this season.


I will give the Pacers a pass here, they lost their number one all-star to a horrific leg injury over the summer, when Paul George went down for Team USA. They would have been a lock for the playoffs if George was playing this year, but relying on Roy Hibbert to be your superstar just ain't gonna cut it, even in the East. 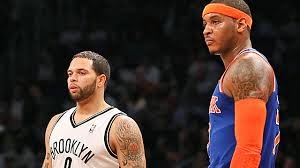 The other two teams I've grouped in as late lottery picks seemed to have followed the same failed blueprint. Overpay for selfish, and/or overrated players (Carmelo Anthony/Amare Stoudemire and Joe Johnson/Deron Williams) and then wonder why you cant put successful role players around them in an attempt to make a Big Three.  Now Brooklyn is a bunch of dinosaurs with all three of their superstars really on the downside of their careers and no young players, cap room, or draft picks to fill their needs. While New York was able to resign Carmelo, but still have the same crap around him as always.

These three teams who were in the playoffs or at least sniffing a playoff spot last year will not make them this year. They will just add to the mediocrity that is the bottom half of the Eastern Conference. 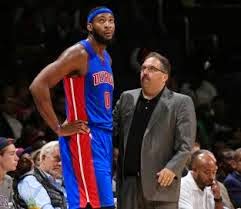 Truthfully, I hate the Atlanta Hawks. They never suck, they are never good they just coast to the 8th seed every year. So I have to list them as a possible playoff team. They could be the Celtics biggest competition for the last spot in the Eastern Conference Playoffs. I say this for no other reason than the Hawks literally know nothing else but to make the playoffs and just lose in the first round. That is all I will say about Atlanta.

The Pistons, however, are a different story. I don't necessarily like their lineup with three starting Power Forwards taking up the front court, but they did hire Evil Genius Stan Van Gundy. SVG just may be the one who would be able to get the most out of Andre Drummond who is going to be the key to this teams success. If they can dump Brandon Jennings and get a real point guard they may have a pretty good shot of a 7-8 seed this year. 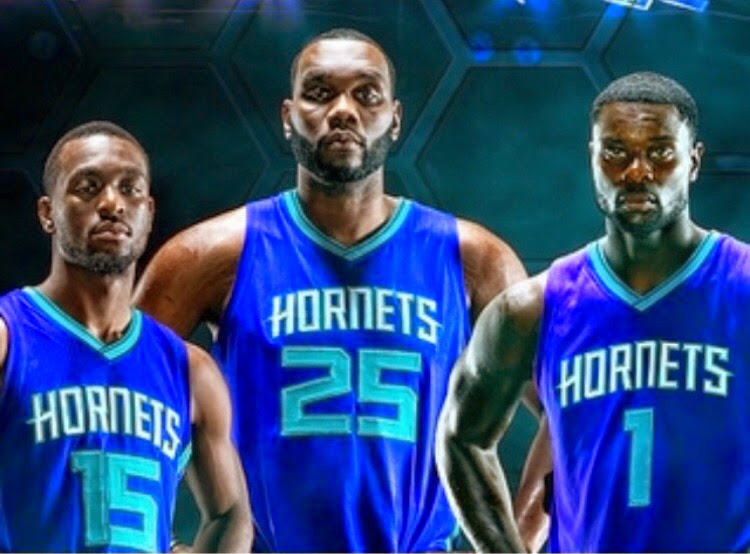 The Raptors are on this part of the list just because the Atlantic Division needs a winner and I don't think the Celtics are quite there yet. The Miami Heat are still good enough to get into the playoffs by adding Loul Deng and getting burned by LeBron. The Hornets are definitely sneaky good this year. It's going to be fun watching this team with Big Al Jefferson, Kemba Walker, and Lance Stephenson scoring a TON of points but giving up a lot too.

Washington will look to improve on their surprising playoff run last year. They should be knocking on one of the top 2-3 seeds this year. The evolution of John Wall and Bradley Beal should be interesting to watch now that people are expecting success. Also, they added Causeway Street's favorite; Paul Pierce, to bring veteran presence and leadership.  Their success all depends on the health of their bigs, though. Marcin Gortat and Nene need to stay healthy for them to have a chance. 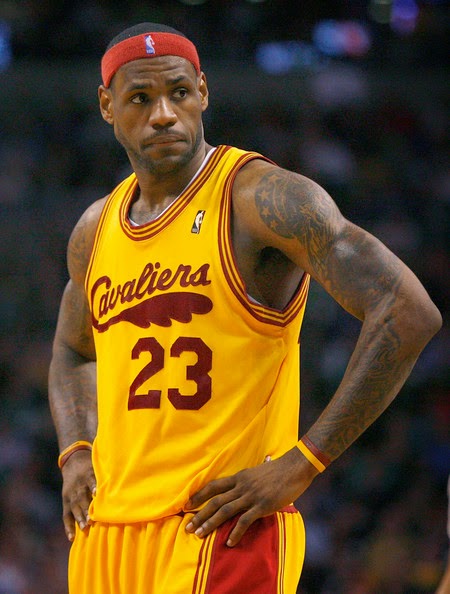 
Derrick Rose should be back to his old self this year. But even if not, Joakim Noah has developed into the best center in the league so they will be a team to beat this year.

We all know about the Cavs so I'm not going to state the obvious. They stacked, and they nasty, and they prolly gonna win it all. LAME.

Prediction for the Boston Celtics


So now we ask the question everyone is wondering...

WHERE DO THE CELTICS FIT IN TO THIS CLUSTER BLEEP?

A lot of things need to go right for this team, but I just think there is way to much talent to tank. Marcus Smart and James Young will impact the team in a positive way this year. Jeff Green and Brandon Bass can't possibly be OK with another 25 win season. Jared Sullinger could be a sneaky pick for an All Star candidate, and then there's Rondo. 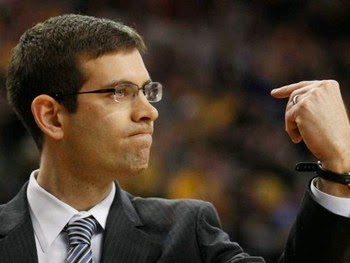 Oh, Rondo where have you been? Last year coming off the ACL surgery he was by far the best player on the floor when he played,  but still was a shell of himself. This year he should be back in action and ready to go, and I do not see Danny Ainge trading him during the season. Also, my bold prediction of the season is that Brad Stevens will game plan and motivate his way to Coach of the Year honors.


Maybe I'm just a lot more optimistic of this team this year, but I do not think it is crazy to say that they will make a run at the 6-8 seed in the playoffs. A first round exit would not be a disappointment, but would be viewed as a building block and give perspective to a rebuild that worked out.