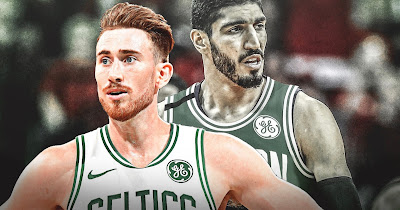 Enes Kanter has had quite the eventful offseason and while training camp is just around the corner, the Celtics big man continues to talk about his new teammates every chance he gets.

Earlier this week, Kanter appeared on NBC Sports Boston's Celtics Talk Podcast and spoke about his recent workouts with old friend Gordon Hayward and the forward's progress since his ankle injury nearly two years ago.


"Gordon Hayward — I think he should definitely start eyeing the All-Star Game," Kanter said. "He had a very bad injury [but] I see his work ethic, he's been doing an amazing job.

"I just actually played against him [Tuesday morning] and he looked amazing. Very good shape, lot of confidence, and he is comfortable out here."

Hayward has been vocal about his offseason workouts in Boston and was very grateful with the Celtics coaching staff, as they worked with him all summer at the Auerbach Center.

It's also not the first time that Kanter, who played with Hayward for more than three seasons in Utah, has given the Celtics forward high praise over the past couple of months. So if anyone's assessment of Hayward getting back to All-Star form holds any weight it would be someone like Kanter.


"I played with that dude three and a half years with Utah Jazz. I know the guy, I know how hard he works, how much he is willing to learn, and he makes his teammates better," said Kanter. "I'm very excited about him. He should definitely be eyeing the All-Star Game."

Kanter signed a two-year, $10 million deal with the Celtics at the start of NBA free agency as, he averaged 11.4 points and 9.7 rebounds per game for the Trail Blazers in their run to the Western Conference Finals last spring. Kanter has been checking in with Hayward on a regular basis, even while putting on 49 youth basketball camps all over the country (his final one will be in Boston this month).

Though there were flashes of what Hayward could bring to the table last season, the C's forward never found consistency during a disappointing 2018-19 campaign.


"He's been here all summer," said Kanter. "[Hayward] puts the work in, [he] focused on what he needed to focus on. Like I said, again, obviously he's a really really good basketball player but the confidence, with that injury -- I think last year was a little rough for him but I think this year, man, I see him, he looks strong, he looks in really good shape, and he's enjoying his time here."

If you're keeping track, Kanter has teammates Kemba Walker, Jaylen Brown, Jayson Tatum and now Hayward making it to the All-Star Game this upcoming season.