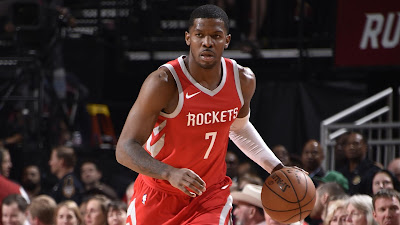 Joe Johnson only played 48 games for the Celtics before being shipped out in a trade to the Phoenix Suns in 2002. The 38-year old Johnson, a seven-time NBA All-Star, last played in the NBA for the Houston Rockets in the 2017-18 season. This summer, he earned MVP honors with the Triplets of the BIG3 League and came away a champion as his team defeated the Killer 3's in post-season play on Sunday.


He does it again! Only fitting that MVP Joe Johnson (@TheJoeJohnson7) sinks a GAME WINNER to win the #BIG3Championship 🏆🏆🏆 pic.twitter.com/UmQhPAT2Zc
— BIG3 on CBS (@thebig3) September 1, 2019


"Iso Joe" is reportedly working out for several NBA teams including the Clippers, Bucks and 76ers. His impressive play for over the past few months evidently got the attention of some NBA general managers. He led the BIG3 in total points, 4-pointers, field goals and assists.

In the final postseason game versus the Killer 3's, Johnson notched 28 points, six rebounds and two assists. At this point in his basketball career, he obviously would take a bench role on a contending team. Former Celtic, Kendrick Perkins, is rooting for Johnson to make it back to the NBA.

Even tho Joe Johnson is still auditioning for the NBA and probably is going to get picked up I have to applaud him because he put his pride aside and was on a mission and played in the Big 3 and killed it and didn’t ask for any handouts or favors! He went and got it out the mud!
— Kendrick Perkins (@KendrickPerkins) August 28, 2019


Johnson had indicated that he didn't join the BIG3 as an entry back to the NBA, but rather as therapy after the death of his mother last February. A contender in need of a proven scorer off the bench could do much worse than inking Iso Joe to a one-year deal.