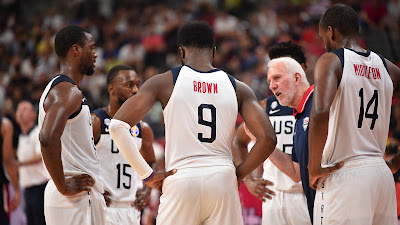 Team USA came up short during their quest to win FIBA World Cup gold, as they fell to France 89-79 in the quarterfinals on Wednesday at the Dongguan Basketball Center in Dongguan, China.

Despite Donovan Mitchell leading all scorers with a game-high 29 points and 6 rebounds, it was too much Evan Fournier (22 points, 4 assists) and Rudy Gobert (21 points, 16 rebounds), who led the way for France in the fourth quarter, outscoring Team USA 26-13 in the period to secure the victory.

Marcus Smart finished with 11 points, while Kemba Walker added 10 points on 2-of-9 shooting from the field for Team USA. Jayson Tatum missed his fourth straight game with an ankle injury, after taking part in team shootarounds and being upgraded to a game-time decision prior to tip-off.

There were 12 different lead changes in total, as the Americans trailed 45-39 at halftime, before cutting France's 51-41 third quarter deficit. Mitchell's 14 points in the period helped the U.S. take a 66-63 advantage into the final frame.

With Team USA ahead 72-65, their largest lead of the game and with 8:11 to play, France called a timeout to re-group and go on a 11-4 run to tie it up 76-76 with 4:35 remaining. France re-gained a lead in the next two minutes, while the U.S. would only score three more points the rest of the way for their first loss (5-1) of the World Cup and first defeat in 58 international tournament games overall.


"We knew it was going to be a [tough] game," said Celtics guard Jaylen Brown, who chipped in 9 points off the bench for Team USA. "We just didn't do what needed to be done. At the end of the day, we came up short. France was better than us tonight, unfortunately."

U.S.A. was out-rebounded 44-28, while France also won the battle of second chance points 16-10. When asked if the French's length played a role in Team USA's offensive struggles, Marcus Smart downplayed France's size as being the problem.


"It really wasn't so much as their size as it was our execution," said Smart. "We were really stagnant on the offensive end, and with that being said, they hurt us on the defensive end. They moved us, and we didn't do it on the other end. It bit us on the butt."