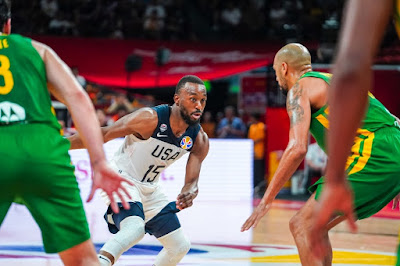 It was a close game for the first three quarters, but Kemba Walker, Marcus Smart and Jaylen Brown all made key contributions, as Team USA extended the lead in the final frame and it ended with an 89-73 victory for the USA over Brazil and a trip to the quarterfinals of the FIBA World Cup.

Walker started along with Myles Turner (16 points, 8 rebounds), Harrison Barnes (10 points),  Joe Harris (8 points) and Donovan Mitchell (6 points, 7 assists), while Jayson Tatum was forced to miss his third game with a sore ankle. The score remained close in the first half, and Team USA's 55 percent shooting from the field was much-needed, as their accuracy from beyond the arc was only a mere 31 percent.

By halftime the score was 43-39 in favor of the Americans, as Walker was the rock for the USA with 10 points and five assists. Smart was all over the court, coming away with his normal varied line of six points and one last-second steal to end the second period, as he displayed no indications of any past injury issues.

Former-NBA big man Anderson Verejao was the energy guy we remember, scoring six of his 14 total points, grabbed four of his eight rebounds and handed out two of his three total assists for Brazil in the first half.


Team USA was able to stretch the lead in the third period, as Smart once again had another last-second play, this time a 3-point shot which gave the USA an 11-point lead, with the score at 67-56.


Brown opened the scoring in the final period with a layup, and his energized play helped extend the USA's lead to 18 points (80-62) at the 6:00 mark of the fourth quarter. He and Smart were doing it all on both ends of the floor.


Walker finished with 16 points, five assists, while Brown added 11 points on 5-of-9 from the field, along with 4 rebounds and a very-notable 4 assists. Smart chipped in 9 points. "Team Shamrock" did a fine job of bringing Team USA a step closer to a World Cup Title, as they also officially qualified for the 2020 Olympics in Japan.

The U.S. will face new Celtics center Vincent Poirier and France in the quarterfinals on Sept. 11.