Kyrie Irving on leading the Celtics last season: 'I failed those guys' 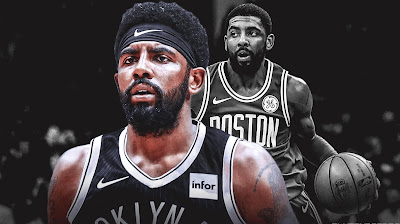 Kyrie Irving broke his silence on his split with the Celtics during Brooklyn Nets' Media Day on Friday.

In the All-Star's first press conference since officially signing a four-year, $141 million deal with the Nets over the summer, Irving explained why he chose to leave Boston after telling Celtics season ticket holders a year ago he'd plan to re-sign with the storied franchise. Though he says he meant it at that very moment, it was only two weeks later when everything changed, which began with the death of his grandfather in late October.


"Basketball and the joy I had from it was sucked away from me," Irving said at media day. "There was a facial expression that I carried around with me throughout the year. Didn't allow anyone to get close to me in that instance, and it really bothered me. I didn't take the necessary steps to get counseling or get therapy to deal with somebody that close to me dying. I've never dealt with anything like that. So, for me, I responded in ways that are uncharacteristic and, like I said, I had to acknowledge that fact."

Irving's mood became unpredictable in a spiraling Celtics locker room throughout the rest of the season, despite the team having such high expectations. Well before Boston was eliminated by the Milwaukee Bucks in the second-round of the playoffs, Irving had distanced himself from his teammates, even when it seemed like everyone was on the same page at the end of the regular season and in the first-round of the playoffs against the Pacers.


"So, throughout that year, it just became rocky and a lot of the battles that I thought I could battle through from the team environment, I just wasn't ready for. And I failed those guys in a sense that I didn't give them everything that I could have during that season, especially with the amount of pieces that we had. My relationship with them, personally, were great but in terms of me being a leader in that environment and bringing everyone together, I failed. For me it’s like just a huge learning experience just to slow down and acknowledge that I'm human in all this."

Irving echoed what many from last season's roster have said over the past few months that believe there were too many individual goals that were trying to get met rather the team as a whole striving to be successful.


"Marcus [Smart], Terry [Rozier], all those guys just want to be great," explained Irving. "We were all internally trying to be great and I don't think we were trying to be great as a team to meet at the top. And that happens in human environments all the time, whether people want to admit it or not."

Though many who follow the Celtics have probably moved on from the likes of the shortly lived "Kyrie Irving-era" in Boston, it's safe to say that the page on what was a messy 2018-19 season can finally be turned whether you buy what Uncle Drew is selling or not.