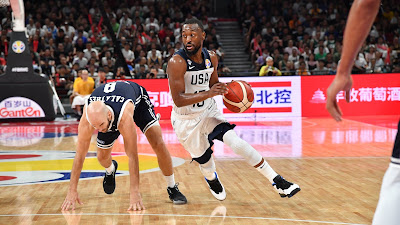 Team USA remains undefeated in the FIBA World Cup tournament, after a 69-53 win over Greece at the Shenzhen Bay Sports Center in Shenzhen, China to open the second round.

Kemba Walker led the U.S. with 15 points, 6 assists and 4 rebounds, while Jaylen Brown added 8 points and 9 rebounds. Jayson Tatum (ankle) did not play for a second straight game.

Marcus Smart made his return after sitting out in Team USA'a win over Japan, with a left quad strain. The longest tenured Celtic had the tall task of guarding the NBA's current MVP Giannis Antetokounmpo, who finished with 15 points and 13 rebounds for only his second double-double in four games.

In international play you can be much more physical than what NBA rules allow and Smart was well aware as he defended "The Greek Freak" for much of the second quarter, where he was held to just two points.


Just watch the defensive effort from Marcus Smart on this play. Doesn't let Giannis get post position to start, fights to front to take away a catch (man did 4 spin moves) and still gets a contest on the shooter at the end of the possession. pic.twitter.com/gIHMfIakHS
— Steve Jones Jr. (@stevejones20) September 7, 2019


Despite Team USA scoring under 70 points, they held Greece to just 31.8 percent shooting, while out-rebounding them 50-40.

Donovan Mitchell was the only other player to score in double-figures for the U.S. with 10 points and Kostas Sloukas chipped in 13 points for Greece.

After a back and forth first quarter the U.S. clamped down on defense in the second period, limiting Greece to shoot 3-of-18 from the floor. Team USA took advantage of the Greeks getting into the foul bonus early, as they hit 8-of-9 from the free throw line and outscored them 19-8 to end the half and take a 38-25 lead into intermission.

Greece would cut the deficit 38-30 to open the third quarter before the U.S. went on a run and pushed the lead back to double-digits. Greece never got within less than 11 points in the final frame, as they're now 2-2 following their loss to Team USA.

The red, white and blue will face Brazil (3-1) Monday, Sept. 9 at 8:30 EST on ESPN+. The top two teams from each of the four second round groups will qualify for the quarterfinals, which will be played on either Sept. 10 or Sept. 11.