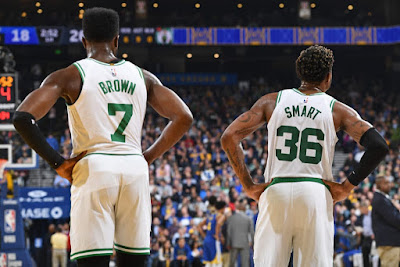 ESPN.com has released their yearly 100 Best NBA Players List, and three Celtics have made the bottom half so far for the upcoming 2019-20 season.

While the Celtics, who are looking to bounce back from a disappointing 2018-19 campaign, as ESPN has Marcus Smart, Gordon Hayward and Jaylen Brown cracking the list.

Though the four-letter network has ranked the Celtics-trio lower this time around than a year-ago when the expectations of the team were much higher, it's still a good look for Brad Stevens' roster that remains deep despite the loss of three leading scorers in Kyrie Irving, Al Horford and Marcus Morris.

Here's where the three C's players landed and the reason behind their ranking:

"No regular starter expends more energy on defense than Smart, who seems to will himself into position to thwart opponents’ plays," wrote Kevin Pelton. "In addition to effort, that also requires strong pattern recognition from Smart, who excels at gambling defensively when the odds are in his favor."

"Hayward arrived in Boston as a top-30 player," Tim McMahon writes. "It's probably a stretch to expect him to get back to that level with the Celtics, who have too many mouths to feed to build an entire offense around him like the Jazz did. But Hayward should benefit from a better atmosphere in Boston and a full year of chipping away at rust and doubt and merit All-Star consideration in the Eastern Conference."

"Brown was one of the few Celtics who wasn't afraid to push back against Kyrie Irving last season when the former Boston point guard took some shots at the younger players on the roster," Brian Windhorst writes. "Brown is sometimes quiet, but he isn't meek. That attitude has been positive this summer."

It should be interesting this season to find out how Hayward will get along with the likes of Smart and Brown, plus Kemba Walker and Jayson Tatum (more than likely both are in the top half of ESPN's list), who are all fresh off their Team USA bonding experience from a couple of weeks ago.