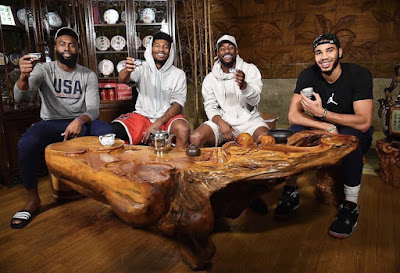 USA finished in 7th place, far worse than what most expected. The Celtics' rivals and general haters are on a roll -- taking shots at the Boston foursome of Kemba Walker, Jayson Tatum, Jaylen Brown and Marcus Smart.


Team USA really just lost to France. They’re now playing for fifth place. I guess that’s what happens when you depend on 4 Celtics to win you something
— 𝙃𝙀𝘼𝙏 𝙉𝘼𝙏𝙄𝙊𝙉 (@HeatvsHaters) September 11, 2019


No mention is made about superstars such as Kawhi Leonard and Anthony Davis choosing not to participate in the tweets above. There is also no suggestion that international competition is new to the members of team USA, who had very little time to gel and come together as a team.

FIBA rules, such as the 10-minute quarters and no 3-second defensive regulation, two rules that make for a different game.


Blaming the poor World Cup finish on the fact that four Celtics players were integral parts of Team USA is absurd. Losses happen no matter who takes the floor.


Instead of a medal to show for their efforts, the four Celtics on Team USA added a bunch of extra miles on their legs for nothinghttps://t.co/VHt3arCVUR pic.twitter.com/Wx11Eod1hP
— #RingerNBA (@ringernba) September 16, 2019


A team's effectiveness is often not simply the tum of its parts. Kobe Bryant had a few words on the subject per NBA.com's John Schumann.

Bryant brought up the 2008 Olympics, when one of the most talented teams ever assembled led Spain by just two points early in the fourth quarter of the gold medal game. At the World Championship two years later, a U.S. team with four future NBA MVPs escaped with a two-point win over Brazil in pool play.


"Put the best players that you think are going to make the best team out there on the floor, we are still going to have challenges," Bryant said. "It's not going to be a cakewalk. The days of the '92 Barcelona Dream Team are gone. They're over."


Sure, the days of the '92 Barcelona Dream Team are over, Team USA's seventh place finish was truly disappointing. The Americans played tough defense but the offense often sputtered, in part, because unlike most of the other competing teams they just never had enough time to get used to each other.

Injuries to Marcus Smart and Jayson Tatum didn't help the cause but the blame game needs to stop. “Team Shamrock” and their teammates worked hard and it failed. It's that simple.