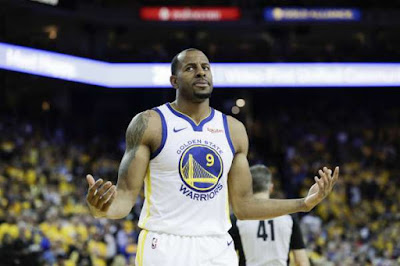 The Celtics 15th-and-final roster spot remains open, and the addition of a battle-tested veteran to be added to that slot must be somewhere in Danny Ainge's mind.

Andre Iguodala was traded to the Memphis Grizzlies by the Golden State Warriors over the summer, as the Griz are in full rebuild-mode and have little use for Iguodala or the $17.2 million left on the final year of his contract.

The 6'6" and 215-pound Iguodala will be 36 years old in January, as he has three championships under his belt, plus a Finals MVP trophy to his credit. According to Sports Illustrated's Charlotte Carroll, Iguodala has been excused from training camp and Grizzlies' Media Day while the team seeks a suitable trade for him.

The $17.2 million salary for a soon-to-be 36-year-old may be a turn-off for potential suitors and a buyout is always a possibility.

The Grizzlies would love to have their 2020 draft pick (top-6 protected) back in their hands, which the Celtics currently own and could become totally unprotected in 2021 if it does not convey next year. But Ainge is not about to turn over that pick to bring Iguodala aboard in a possible Celtics/Grizzlies trade. However, if Iguodala agrees to leave some money on the table in a buyout agreement, he would be a prime candidate for that final Celtics open roster spot as a free agent.

Playing only 23.3 minutes per-game game last season, "Iggy" averaged 5.7 points, 3.7 rebounds, 3.2 assists, to go along with just under one steal and a block, while shooting 50-percent from the field and 33-percent on 3-pointers. His versatility and defensive ability fit Brad Stevens' systems quite well and his post-season experience could also be needed.

The chances of Iguodala joining the Celtics are a long shot but one that may be a good fit for both parties if the savvy veteran becomes available.