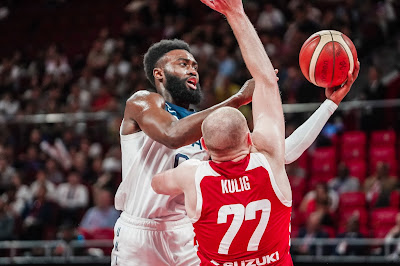 In Team USA's final game of the 2019 FIBA World Cup, they wrapped up seventh place with an 87-74 win over Poland at Wukesong Sport Arena in Beijing, China.

The U.S. concluded the tournament with a 6-2 record and their ticket punched for the 2020 Olympics in Japan, despite coming off back-to-back losses to France in the quarterfinals and Serbia for a chance at fifth place in the classification bracket.

Donovan Mitchell lead five-players in double-figures for Team USA and notched a double-double of 16 points and 10 assists (tying a USA's World Cup record). Joe Harris added 14 points, while Jaylen Brown was the only Celtic that played, as he finished with 8 points, 3 rebounds and 3 assists off the bench.


"You know, obviously, we didn't get the result that we had wanted, but to be able to go to war with a bunch of guys who really sacrificed not only their time, their bodies, there's not a lot more you can ask for," Mitchell said. "I've never been a part of USA Basketball, and this was an incredible experience. Obviously, with the game today we showed a lot of character, because even after losing some teams can go the other way and say whatever, and that wasn’t the case with these guys. I'm really happy and blessed to have this opportunity."

USA jumped out aggressive on both ends of the floor, assisting on 10-of-11 made baskets, while holding Poland to 0-of-7 shooting from beyond the arc to take a 28-14 first quarter lead.

Poland, who finished a 4-4 record in the tournament, got within seven twice in the final minutes, but the U.S. ended up outscoring the Polish 24-19 to wrap up their World Cup.


"There are wonderful teams and wonderful coaches all over the world, so there's no surprise in any of that," said U.S. coach Gregg Popovich. "You go compete, and you know the best teams win. I was thrilled with the group of guys that we were able to coach. They made the sacrifice. They worked hard. They let us coach them, and we got them to a certain point in a short period of time. I wish I could have gotten them closer, but it didn't happen."

Team USA shot over 50-percent for the game, including hitting 48-percent of their 3's and are now 129-29 all-time in World Cup competition.


Heading home on a high note! 📽️ Highlights from the 87-74 victory over Poland to wrap up #FIBAWC action in China 👇 [via @espn] pic.twitter.com/BPHKnRXQTc
— USA Basketball (@usabasketball) September 14, 2019