Gordon Hayward tells Celtics fans: 'I'm ready to be the player I came here to be' 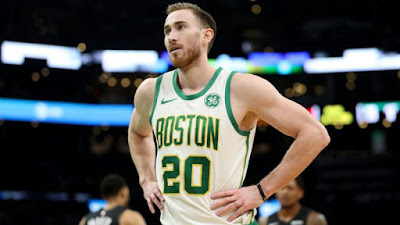 If you've been following this NBA offseason, you know it's been unlike any other in recent memory when it comes to all the league's player movement and changes. But in Gordon Hayward's case it was a chance to have a full summer to workout for the first time in two years.

Hayward took the opportunity to stay in Boston and get healthy after an up and down 2018-19 campaign, where you saw glimpses of the All-Star forward the Celtics had signed back in 2017. With the additions of Kemba Walker and former teammate Enes Kanter, following the departures of Kyrie Irving and Al Horford in free agency, Hayward looks to take on the challenge of getting back to his pre ankle-injury self.

Hayward took to his blog this week in a piece titled "Back Like We Never Left,"  as he's previewing the upcoming season. It appears he's ready to play with Walker, Kanter and all his new teammates, along with others returning to the Celtics roster such as Jayson Tatum and Jaylen Brown, who will both have another year of experience under their belts.

While it's been reported on several occasions this past summer that Hayward has pretty much lived at The Auerbach Center, as he has worked out with the entire Celtics coaching staff and even Kanter went as far as saying that Hayward "should start eyeing the All-Star Game,"  it's safe to say that other than those selected few that have been constantly around Hayward over the past few months, many have no idea what to expect out of the forward as training camp is set to begin next week.

In probably the biggest takeaway, Hayward did conclude his blog with a message to Celtics fans that have supported him and the team.


"I'm ready to be the player I came here to be.

That’s my focus. That and raising a banner at the Garden.

In an Eastern Conference that seems to be more wide-open than ever, if Hayward (11.5 points, 4.5 rebounds, 3.4 assists) could display any consistent resemblance of the All-Star caliber player he was in Utah, the Celtics will not only well exceed this year's already low expectations, but possibly contend and get rid of the bad taste of the 2018-19 season out of everyone's mouths.