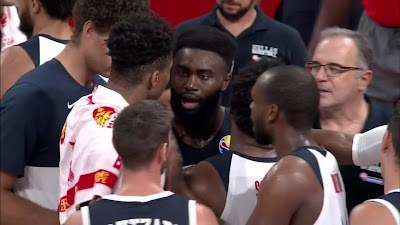 Jaylen Brown and Giannis Antetokounmpo had to be separated just moments following USA's 69-53 win over Greece on Saturday.

With 1:43 left and the game out of reach for Greece, Thanasis Antetokounmpo fouled Harrison Barnes hard from behind on a clear path layup, causing Barnes to land on his stomach in front of Team USA's bench.

Though is was ruled a common foul, Brown and his teammates were clearly upset for the intent and the lack of an initial apology.


"The [no apology] escalated it," Marcus Smart said via ESPN. "At that moment, you've got to take it for what it is. Regardless of whether you feel like it was wrong or right, it was wrong."

After the final buzzer there was no traditional handshake between both teams, as Brown exchanged words with Giannis Antetokounmpo while pointing angrily to Thanasis Antetokounmpo. Referees and coaches had to breakup up the confrontation and USA forward Khris Middelton played peacemaker between Brown and his Milwaukee Buck teammate.


Make that Thanasis Antetokounmpo with the hard foul not Kostas. Looked like Jaylen Brown told Giannis to check his brother. Myles Turner also involved in having Barnes’ back.
— Brian Windhorst (@WindhorstESPN) September 7, 2019


Brown acknowledge to the media afterwards that he and Antetokounmpo discussed the hard foul when the game ended, despite downplaying the incident.

Antetokounmpo, who declined to speak with reporters at all, has had a history with Jaylen Brown and the Celtics over the past two seasons, especially in the playoffs.

Meanwhile, Barnes was uninjured on the hard foul, as he finished with 9 points and 7 rebounds in the win.


"The game was over; probably a frustration play," Barnes said. "Apologies only go so far. If I don't get up and something would've happened, apologies aren't going to help us in the next game. Luckily everything is all good."

Some heated conversations after the game. USA players presumably upset with the foul on Barnes. Middleton playing peacekeeper with Giannis. Not a great way to end the game. pic.twitter.com/WtpLB4nJdb
— Kane Pitman (@KanePitman) September 7, 2019


Team USA advanced to the second round of the FIBA World Cup and are a perfect 4-0, as they'll face Brazil on Monday.