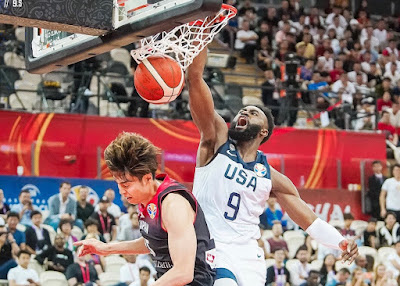 With a berth into the medal round of the FIBA World Cup already secured, Team USA cruised past Japan 98-45 at the Shanghai Oriental Sports Center in Shanghai, China Thursday.

Celtics guard Jaylen Brown led all scorers with 20 points on 9-of-15 shooting from the field, to go along with 7 rebounds and 2 steals. Kemba Walker finished with 15 points, 8 assists, while Jayson Tatum (ankle) and Marcus Smart (quad) both sat out due to injuries.

Harrison Barnes added 14 points, 8 rebounds, as both Donovan Mitchell and Joe Harris each chipped in 10 points a piece for Team USA, who won Group E after a perfect 3-0 record.

After an overtime nail-bitting victory over Turkey earlier this week, Team USA came out of the gate aggressive on both ends of the floor hitting 48 percent (14-of-41 3's) of their shot attempts and holding Japan to only 27 percent shooting overall.

Team USA also out-rebounded Japan 58-33, while their bench scored 46 points in the win.

Yudai Buba was to only player to score in double-digits with 18 points, with the next closest being Yuta Watanabe (9 points) for Japan, who will go home winless after three tries.

U.S. will now face Giannis Antetokounmpo and Greece (2-1) on Sept. 7, followed by a game versus Brazil (3-0) on Sept. 9. Both games will be played in Shenzhen, China.