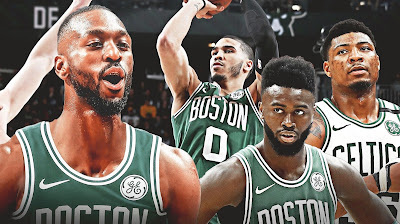 Sports Illustrated has released their yearly "Top 100 NBA Players List"of 2020, and five Celtics players have made the cut as the upcoming regular season approaches.

SI's Rob Mahoney ranked the C's' five best guys, despite the team losing two top-20 (according to this year's list) players to free agency this past offseason in Al Horford (#18) and Kyrie Irving (#15), who were both ranked higher than any current Celtics player.

It should be no surprise that Marcus Smart, Jaylen Brown, Gordon Hayward, Jayson Tatum and Kemba Walker are considered to be the Celtics best players, but for what this list is worth, you can judge for yourself on what Mahoney projects to be accurate or not.

Though four of the five ranked Celtics players are coming off a FIBA World Cup experience with Team USA, it should be noted that no other NBA roster had more than four players that made SI's list this year.

Find out where Mahoney ranked the five best Celtics players and why below:


"Marcus Smart makes his debut in the SI Top 100 after his most impressive season to date—and his first in which he managed to shoot better than 40% from the field. Specialists are notoriously hard to rank, for the simple reason that they can provide different teams with dramatically different value. Smart simplified that analysis by more fully rounding out his game. Not only did he shoot 36% from beyond the arc, but he did so at volume, hitting just 11 fewer threes for the season than Kevin Durant did. Smart's attempts obviously come much easier. What's important, though, is that his career-best shooting wasn't some fluke of infrequency. Smart is a better shooter than he was previously, and a more stable playmaker, and a better finisher. There is still an unpredictability to Smart's game, only it doesn't manifest in the kinds of wild swerves that would derail possessions. All of which only serves to qualify what we already knew to be true: that Smart is one of the sport’s most suffocating defenders, capable of swinging games even before his offense gave him a chance."


"Just when Jaylen Brown seemed ready to enter the next phase of his development, his game—and Boston's entire season—went sideways. These things happen. Even successful careers in basketball can usually be traced in zigs and zags, bouncing off contextual factors and natural limitations. If Brown only turns out to be the uneven contributor he was last season, he would still help his team win. Added intrigue comes with his upward mobility. Any wing with Brown's skill, bounce, and intelligence has the makings of a star, if only they could find the traction. To reach that point, Brown will need to find comfort in making quick decisions; refine his work with the ball; and harness his athleticism more fully. There's a strong frame in place. Now it's up to Brown to find what all it can bear."


"To say that Gordon Hayward underwhelmed last season is putting it kindly. Perhaps we should have known better when the Celtics were downplaying things from the start, insisting even before the season that Hayward's first year back from a fractured leg and dislocated ankle would be a deliberate process. It certainly was; Hayward looked himself only in flashes, after which he would recede from view. The problem wasn't that Hayward's contributions were quiet or subtle. They were flatly insufficient. A ranking like this one assumes that Hayward, another year removed from devastating injury, will more closely resemble his better basketball self. Any optimism must be couched. We projected too much too soon in ranking Hayward in the top 30 a year ago. Placing him at 59 reflects both the star he was in Utah and the fickle contributor he’s been since. Even if Hayward's days as a star really are over, it seems fair to give him one more season to prove it so. Expect him to make a big move in the Top 100 of 2021, one way or another.


"It might be helpful to compartmentalize the version of Jayson Tatum we saw last season from the player he could be one day. That isn't to deny the existence of the former; Tatum's mystifying efforts to become a mid-post specialist proved to be a failure on every level. If that is the crux of his game, he will level out as a player without so much as sniffing stardom. That said, cleaning up his shot profile even slightly would go a long way. The 21-year-old has a lot of the qualities teams look for in a centerpiece prospect: three-level scoring, strong defensive fundamentals, positional fluidity—Tatum even has an NBA proof of concept with his performance in the 2018 playoffs. You can see all the pieces, if only Tatum could crystallize his game a bit. There have been too many nights where Tatum becomes just another guy: a positive contributor, but a forgettable one. Some of that was the byproduct of Boston's ensemble last season. Some other part stems from the way Tatum has operated thus far. Once that changes, so will his status within the league."


"Pick-and-roll basketball is still the core of the modern NBA, and Kemba Walker is among its chief practitioners. This wasn't always the case. Walker spent the first half of his career letting defenses off the hook by stepping into long, difficult twos. Those shots are not only inefficient, but static; defenders aren't forced into uncomfortable situations when a ball-handler comes around a screen in predictable fashion and hoists up a tough shot, which means that the actual power of the sequence goes wasted. The point of running a pick-and-roll is not to get Walker a semi-open shot. It’s to push defenders to the point of panic.

"For Walker, that could be as simple as hesitating in the space behind the screen, forcing more conservative defenses into a gut check. It could be the way he chooses to snake through a pick-and-roll rather than attempt a straight-line drive, extending his stay in the areas of the floor most sensitive to a team defense. Or it might even start earlier: before a screen is ever set, where Walker uses a subtle step to set up his defender to be creamed. Opponents have to respect the possibility that Walker might pull up for a three at any time. That makes him a risk from about 25 feet in, which has a way of making opponents antsy before Walker ever makes his move.

"The only real downsides with Walker can be pegged to his size. Coaches are generally pleased with the way he goes about his work on defense, but any player this small (Walker is a listed 6'1", which feels somewhat generous) will give up marginal advantages over the course of the game. It's just easier for opponents to see over—and shoot over—the top of him. Walker gets some of those points back by positioning himself well and drawing a ton of offensive fouls, but on a certain level he will always be an undersized guard in a league oriented around verticality. Walker was blocked more than any player in the league last season. There will be passes around bigger, longer defenders that he can't quite manage. What makes Walker a star is that he just keeps coming anyway, once more unto the breach."

Do we agree with Mahoney's assessment of his Celtics rankings? Let us know if anyone was too high or low in the comments section, as Boston prepares for 2019-20 season.