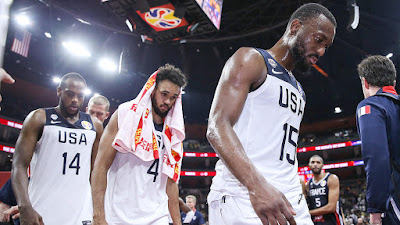 Team USA never climbed out of a 25-point first quarter hole, as they fell to Serbia 94-89 on Thursday at the Dongguan Basketball Center in Dongguan, China.

The Americans, who were eliminated from medal contention after a 89-79 loss to France in the quarterfinals less than 24 hours prior, were relegated to to the classification bracket where they could finish no higher than fifth place in the FIBA World Cup.

Serbia (5-2) took full advantage of Team USA getting their 58-international competition win streak (with NBA players) snapped, as they avenged a loss from the 2016 Olympic gold-medal game, which is the last time these two teams met.

Harrison Barnes led Team USA with 22 points and Kemba Walker added 18 points on 7-of-11 shooting, to go along with 8 assists. Jaylen Brown went 1-of-6 from the floor for 4 points and 3 rebounds off the bench, while Jayson Tatum (ankle) missed his fifth consecutive game and Marcus Smart (hand) also sat out.

Bogdan Bogdanovic had a game-high 28 points and Nikola Jokic finished with 17 points, 7 rebounds, as Serbia handed the U.S. their second straight loss of the tournament.


"They're a great team," said Khris Middleton, who scored 16 points and grabbed 6 rebounds. "We knew that coming into the tournament. I think both teams would rather play each other in a different type of round or setting. They were a great team tonight. Their guy got hot early and kept it going all night long."

Serbia jumped out of the gate on a 11-2 run and finished the first quarter with a 32-7 lead. Team USA crawled their way back in the second period, limiting the Serbs to only 5-of-15 shooting, as they didn't hit a single 3-point attempt.

The U.S. pulled within two (61-59) with 4:24 left in the third, which would be the closet they would get the rest of the way. Team USA still trailed 71-68 heading into the final frame.

The Serbs extended their lead to 10 in the fourth, before Team USA made one last rally. Barnes and Walker hit back-to-back 3's to cut the deficit 94-81 with 59 seconds remaining. Bogdanovic and Jokic each hit a pair of free throws to secure Serbia's win.

The loss means Team USA (5-2), who have already qualified for the 2020 Olympics (Tokyo), will now have to travel to Beijing and face Poland (4-3) on Saturday in search of a seventh place finish.


I think that's the beauty of competition," Barnes said of having to play so quickly after a tough loss to France. "We signed up, Aug. 6, whenever that was, we made that pact that we were going to do whatever we could to win basketball games. To go out there and try to win gold medals. On the flip side of that is that there's a chance that we may not win. And, I think there are no regrets from our group in terms of what we've given, what we sacrificed, the commitment that everyone has made away from their families, teams, organizations, all of that.

"For us, we have to sit with that, get some rest and, on Saturday, we have that opportunity to go out there once again, play a game, represent our country. For some of us, potentially all of us, it could be the last time we wear a USA jersey, or the beginning of many, so I think we just have to savor that opportunity."

Serbia will look to win two in a row to wrap up their World Cup on Saturday against Czech Republic (4-3) in the fifth place game.