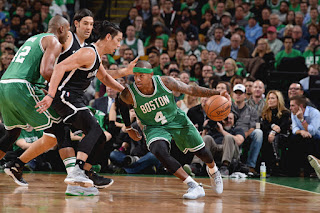 In his sixth NBA season, Isaiah Thomas is blossoming into an efficient playmaker -- a facet of his game that will strengthen the Celtics offense in the long run and help him finish strong in the fourth quarter.

Thomas made back-door passes to his bigs and bounce passes in transition and found his teammates open from the perimeter with ease during Wednesday night's 122-117 win over the Nets. When he penetrated the paint and drew double teams, Al Horford -- Thomas' new favorite pick-and-roll partner -- was a great target for Thomas in the post.

In what turned out to be an ugly win for the Celtics, Thomas' passing set the tone throughout the first half and helped the C's finish with 38 assists on 48 baskets. Instead of being the focal point on his team's offense -- a role Thomas has become accustomed to in Boston -- Thomas was a distributor and waiting until the third quarter to strike. He scored 12 of his 25 points in the third. His offensive outburst helped extend the Celtics' lead to a 16-point advantage (97-81) before the final frame.

However, after the Celtics reserves squandered the lead in the fourth quarter, Thomas reverted to being the set-up guy when he needed to be the leading scorer that he is. He committed one of the ugliest turnovers of the night -- a no-look pass that landed in an opponent's hands and led to a Bojan Bogdanovic 3-pointer that pulled the Nets to within three (120-117).

Although the C's were able to fend off the Nets in the final minute, Thomas understands that blowing double-digit leads in the fourth quarter is unacceptable, and he isn't making excuses for the Celtics' sloppy play.


"We want to be great, we want to be one of the top teams in the NBA, that can't happen," Thomas said. "There's no excuse for it. If we want to be a top team like 'they' say we're going to be, we have to do a better job of closing games out."

If the Celtics are going to be one of the top teams in the Eastern Conference, Thomas cannot shy away from scoring in the fourth quarter. Setting up teammates like Avery Bradley (17 points) and Jae Crowder (21 points) will certainly pay dividends this season, but it's important for Thomas to go into attack mode at the end of games -- much like he did in the third quarter.

Thomas finished with 25 points and nine assists in Wednesday's win. Despite the late-game frustration, Thomas said it's still a great feeling to get a win and be back at TD Garden.


"It feels great," Thomas said. "We didn't end it like we wanted to, but we definitely got the win and it feels good, to play in front of your fans and really get going and playing for something that counts."