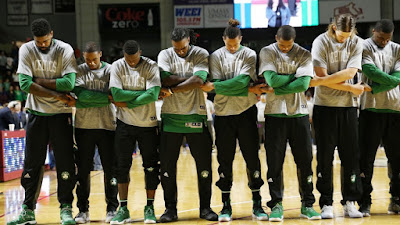 The Celtics chose to embrace the term 'unity' when they locked arms during the national anthem before their preseason game against the Philadelphia 76ers on Tuesday night, in response to the police brutality witnessed across the nation.

Last week at Celtics Media Day, coach Brad Stevens eluded to the fact that the team would most likely address the topic in some form, whether it would be a in a protest form or not. The C's chose to come together, arm-for-arm and held hands -- much like the 1960-61 Celtics team did during the Civil Right era.


"I think it's good to shed light on our country and what we need to change," Jae Crowder explained. "I think me, personally, I'm going to take a different approach. I like to do more team stuff, not to seclude myself away from the team as much, but I do stand behind those guys who have done what they've done but I do want to do something to shed light on that. Our country needs change, and that's the way I want to go about it. I don't know exactly what that's going to be but I'm sure something will take place to shed light on we need change. We need to come together as one as our country is going through a lot right now."

Stevens admitted that he's had individual talks with players on the topic but at the time nothing was planned. Now that we've seen what the Celtics came up with as a team to show unity, Stevens' thoughts on the importance of addressing the topic is much more vivid.


"We've had a lot of discussions at an individual level," Stevens said. "I think there are things [going on] that are really important right now. How you want to be as an individual and what you stand up for."

Click video below to see what the Celtics posted moments after the national anthem.

A message from our players on #unity. pic.twitter.com/enT6DALs1b
— Boston Celtics (@celtics) October 4, 2016