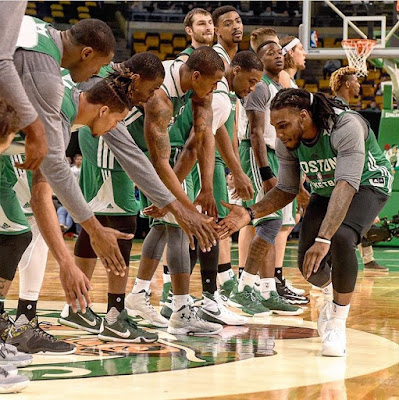 As the Celtics begin their preseason schedule against the 76ers at the Mullins Center in Amherst, there's no one more excited to get the 2016-17 season underway than C's swingman Jae Crowder.

With the addition of free agent Al Horford, the Celtics will look to improve on a 48-win season that ended with a first-round playoff exit. Ever since the C's signed the former Hawk, Crowder has been praising the arrival of his new teammate.


"It was a challenge in the playoffs, he’s such a great player," said Crowder of Horford. "He knows exactly what to bring to the game of basketball, to a team, and it’s no coincidence that wherever he goes, he wins. Since his college days on, he’s been a winner. He brings leadership to us, he brings a  winning mentality, and I know for sure he’s great at what he does, and that’s protect the rim, score and rebound at a high rate."

When asked about any potential improvements other than personnel for the Celtics, Crowder believes that they are not far from where they want to be once the postseason comes around.

"We have the confidence right now," said Crowder referring to himself and his teammates. "I think we just have to withstand it and get better, and take each day, each game as a challenge to get better. At first our goal was to make it to the playoffs. Okay, we’re beyond that now. We have to really focus in on winning once we get there, but it can’t happen without going through the whole season and building with one another. I feel like that's what we're getting better at, we’re going to get better at it, we’re going to take each game serious because when it comes down to it, those games that we played before count. I think we know that."

Crowder also believes that in order for the Celtics season to be considered a successful one the C's have to go further than they ended up last April.

"Success? Home court advantage in the playoffs and getting past the first round first," Crowder explained. "Because two years in a row we got there, and the same result, basically, we have to progress from that. Finishing better than we did the year before is always progression, and I feel like that’s what we’re shooting for."

As much as the Celtics have been exciting to watch the last two seasons, this is the year C's fans want to see a significant leap into championship contender status, even if most analysts don't see Boston challenging the current NBA champion Cleveland Cavaliers for the Eastern Conference crown.

"The reality is we’ve built an image now to be like a household name with a couple players who were nobody before they had the opportunity here [in Boston]," said Crowder. "Now we have to take the next step, the next challenge is to be a great team, and we can get good recommendation as players, but our team has stalled out in the first round the past two years so it just takes on more of a challenge as a team perspective and winning ball games.

It’s okay to have all the personal accolades but at same time, the team has to win games. I think that’s what I’m focusing on more myself because I feel like I know what it takes each and every night. Now how do I get my team to win? How do I do more to win a basketball game when it counts? I think that’s a step we’re going to take next, just winning ball games and not worrying about individual accolades, just worrying about where we are at with team success. The rest will take care of itself."

Despite being injured [high ankle sprain] at the end of last season and struggling in the playoffs, Crowder believed sitting out was not an option, especially because the Celtics needed as many bodies as possible in order to have a chance against the Hawks.

"Yeah, I was not close to 100 percent, but I felt like I couldn’t sit out," Crowder explained. "I couldn’t take any days off, because at that time, we had to [have] all hands on deck. I just tried to suck it up as much as possible, it limited me a lot but I just felt like my spirit, just being out there with the guys and fighting was more than me just taking that game off or that series off, or sitting out anything like that. I just had to get out there.

It’s unfortunate that the injury happened that late in the year and I thought I was ready to go and bounce back. But I was more fatigued, my ankle was more fatigued than I really realized. Right now I’m healthy, I took a lot of time off right when the season ended. I trained, I trained my mind, and the way the season ended last year really gave me a chip on my shoulder to get better, and to get in the lab and work and get better at the things I need to work on. I think everything happens for a reason."

Speaking of things happening for a reason and having a chip on your shoulder, what did Crowder have to say about his comments towards the most sought after free agent this past summer; Kevin Durant after he chose to take his talents to the Bay Area?

"I’m a competitor. that’s what drove me to say what I said," Crowder expressed. "Of course I have a chip on my shoulder, of course [the Warriors] have a bullseye on their back. That’s just the way it’s going to be. I don’t hate [Durant]. I don’t like the decision, but I don’t hate him. I’m a competitor so they are going to get our best shot, all basketball related things. I’m just a competitor, that’s what came out that day. I don’t dislike him as a person, but I do want to compete against him right now. I’m sure it’ll be fun. That’s all it was. I’m just a competitor, my competitive side came out that day, it was my first time ever being in a situation like that, trying to recruit a guy from free agency, so it was a little different from me. Now I see how that side of it goes, so I’ll be more prepared for it next time. I won’t put all my eggs in one basket like I did."

It should be interesting come November 18th at the TD Garden when the Celtics take on the Warriors on ESPN.

In the meantime, Crowder did have positive things to say about rookie teammate Jaylen Brown as he continues to impress everyone during training camp thus far.

"He's everything that I wanted to be at that age," said Crowder. "He's very mature, beyond his years. He'll have a conversation with you about anything. I like that, personally. I don't always want to talk about basketball. I want a guy that I can go be at home with and just chill and talk about anything. He loves music, just like me. He's into music, he makes beats and stuff like that. I just wanted to get to know him a little bit more. [ESPN Boston]

"Us just talking to him and taking him in, it's big for him. I think he knows that," said Crowder. "He's aware of it. I was telling him, 'You hanging around with Jimmy [Butler] is the right thing. When I saw you do that, I knew you were on the right path, because Jimmy is a great worker.' If he's going to work, then all the rest of that stuff kind of plays itself. I think us being in his corner is going to help him out a lot."[ESPN Boston]