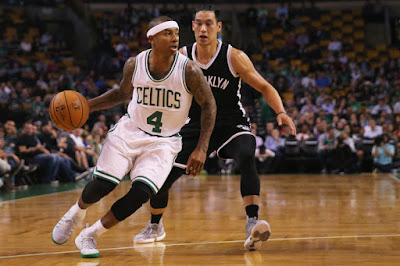 The Celtics looked like they're more than ready for their season opener against the Nets.

Isaiah Thomas only needed 15 first-half minutes to score a game-high 19 points as the Celtics plummeted the Nets, 120-99 in their second-to-last tune up before the start of the regular season.

The Celtics' offense carried their momentum from Saturday's game at New York into TD Garden on Monday as they shot nearly 50 percent (48.8) from the floor and kept their opponent at bay throughout most of the night.

Much like the Knicks did against the Celtics, Brooklyn erased a double-digit deficit and came within two points of tying the game before the C's went on a shooting spree from downtown in the midst of a 14-2 run. They finished the third quarter 6-of-11 from deep.

With all of the starters watching from the bench throughout the second half -- reserves like R.J. Hunter, James Young, Terry Rozier, Gerald Green and Jonas Jerebko all took turns knocking in 3-pointers. In his first preseason game in Boston, Jaylen Brown led the bench with 12 points on 5-of-8 shots, including one 3-pointer.

James Young -- who continues to fight for a final roster spot -- played his best game of the preseason -- finishing with 10 points, including 2-of-5 from deep, 4 rebounds, 3 assists and one steal in 16 minutes.

Terry Rozier (10 points, 4 rebounds, 3 assists, one steal) clocked in a team-high 21 minutes and finished with a plus-9 game rating. He continues to prove himself as a viable backup to Isaiah Thomas.

Brooklyn had a hard time keeping up with the Celtics' fast-break in the first half as the C's tacked on 62 first-half points. Celtics did a superb job of rotating the ball and creating open shots for players like Thomas and Avery Bradley -- the back court duo that the Nets couldn't contain before halftime.

Especially Thomas, he was a nightmare for Nets guards Jeremy Lin and Sean Kilpatrick as he was able to penetrate Brooklyn's defense with ease, knock down shots from the perimeter and get himself to the free-throw line.

Although the C's got off to a very sloppy start in the second half, the same group of reserves that nearly surrendered a 12-point lead was able to hold on to it and rebuild their advantage to a 21-point win.

The Celtics will play their final preseason bout on Wednesday night at TD Garden when they take on the Knicks.