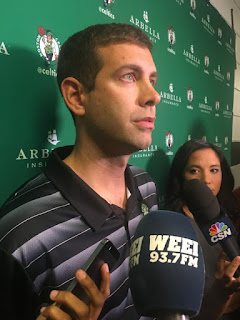 Moments away from the start of the 2016-17 season, Brad Stevens spoke to the media about the high expectations set for his team and how he plans to handle the tough task of heading into Wednesday's season opener against the Nets without two of his best guys off the bench -- Marcus Smart and Kelly Olynyk.

Olynyk has been given a timetable for his return and has already begun participating in full contact sessions.


"Kelly went to see the doctor yesterday, gave him probably a full clear timeline," Stevens said. "He's still probably a couple of weeks away but he's doing 5-on-5, it's just a matter of ramping it up so that the next day they continue to get less and less.

"He will not participate in every 5-on-5 segment but each day will be ramp'd up and increased a little bit more. Again, it's more about the fatigue in his shoulder after the fact."

Heading into his season opening game against the Nets, NBA experts are projecting the Celtics to reach the Eastern Conference finals -- an expectation Stevens says he isn't ready to set for his team.


"I have no idea, I just hope we play well tonight," Stevens explained. "That's the bottom line. There's 82 of these. The last thing anyone in there is thinking about is what happens down the road. We have to play well. I've said this before, we were as close to second as we are to tenth so I understand the pick. But I also understand we need to play well.

"Well see, we'll see," Stevens reiterated. "Again, I'm not ready to anoint us or drop us, I want to see. It's about how you play when those lights come on."

While Stevens may not want to set the bar too high or too low for his team, he enters the 2016-17 season confident in his guys. And believes the early season opportunities for his youngest players will only benefit the Celtics in the long run.


"I feel good about what we have," Stevens explained. "I think that having to play some younger guys early is going to be a good thing down the road but we'll see. We lost some guys too who were very significant contributors, I don't want to downplay what they brought to us. This is a good team, good group of guys. I have no desire to set a ceiling. Sure, but at the same time it's about playing well when your opportunity presents itself."

Ideally, Stevens says he would like to play 9-10 guys in the Celtics' season opener but doesn't have a set rotation of which players will be handed Smart and Olynyk's minutes throughout the first 2-3 weeks of the season.


"Not tonight, just simply because the fact that two of them that are probably in it, or at least have been mainstays in it, are out," Stevens said. "I think ideally you'd like to play in the 9-to-10 range. I've got an idea right now, but it's based on a month of work and the exhibition games and everything else. But this is why these are such important games for the guys that get to play when others are out, because this establishes a trust of consistency, right, so that you can see them doing their job on every possession."