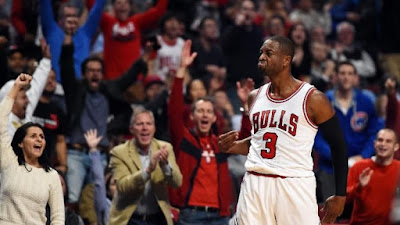 The new look Chicago Bulls were supposed to come into the 2016-17 regular season with an Achilles heel in the form of three point shooting. Jimmy Butler, Rajon Rondo, and Dwayne Wade are all great offensive players, but none of them have shown the ability to have any semblance of a reliable 3-point stroke.

That was until last night.

Butler, Rondo, and Wade went a combined 9-14 (65 percent) from behind the arc last night and were able to put the Boston Celtics away 105-99.

It was a sloppy game overall with the Celtics coming out of the gate slowly but they were eventually able to battle back in it, getting the game to within two points with under a minute to play. That was the closest the Celtics would get all night.

After Jaylen Brown was called for a travel and turned the ball over back to the Bulls, it was time for Wade heroics. With the Bulls still up 101-99 and with under 30 seconds left in the game, Wade nailed a step back three over Avery Bradley to all but seal the game for the Chicago Bulls.

"To be able to make a shot like that and helps us get this win, it's like the perfect storm," Wade said. 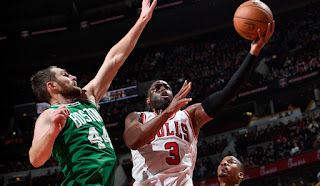 The Celtics move to a 1-1 record on the young season and after the game they weren't so mad about the actual loss but more about how they lost. Jae Crowder said that the reason why this loss was a bad one was because he felt the Celtics were getting "punked" all night.

It was a chippy game with multiple tussles between Crowder, Butler, Rondo and Isaiah Thomas that eventually resulted into a pair of double technical fouls being called.

The Celtics, who have now allowed 100-plus points in their first two games, played another subpar defensive game.  For a team that hangs its hat on defensive intensity, and frustrating the other team's offensive flow, they've looked borderline incompetent to start the season.

Brad Stevens apologized to the media for his teams sub par performance to open his press conference saying "I can't believe you guys all stuck around for that" after Wednesday night's home opener and Thursday night's game against the Bulls gave us a similar sentiment.

The most frustrating part of the loss was the Celtics actually outshot the Bulls by a significant margin. The Celtics shot 50 percent from the field to Chicago's 39 percent. The issue was the Bulls were able to beat the Celtics all night on the glass leading to dominance in second chance points. The Bulls out-rebounded the Celtics 67-44 on the night, including a staggering 18-3 advantage on the offensive glass.

The C's have one day off before traveling to to Charlotte on Saturday to take on the Hornets.

Terry Rozier had another strong performance off the bench for the Celtics with 8 points, 4 rebounds, 4 assists and 2 steals to stuff the stat sheet, doing his best Marcus Smart impression.