Marcus Smart (ankle) out for 2 Weeks 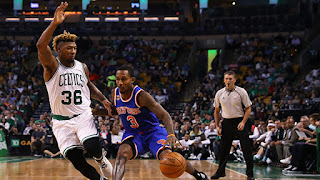 It wasn't the kind of start to the 2016-17 regular season that the Celtics envisioned for Marcus Smart but when he went down in their preseason finale against the Knicks, Smart knew he wouldn't be ready for Wednesday's season opener against the Nets.

Following last week's game against New York, Celtics officials announced that Smart sprained his left ankle and were hopeful that he wouldn't miss any games. However, the third-year guard announced on Tuesday after practice that he will miss at least the first two weeks of the regular season.


"A couple of weeks. That's the projection that they gave me, really just not trying to rush anything and just trying to make sure that we can limit this from happening again," Smart said. "We're taking every precaution we can with it." (WEEI.com)

This isn't the first time Smart has suffered a left ankle sprain. He injured the same ankle in his rookie campaign with the Celtics and admitted on Tuesday that he's very happy to be out of a walking boot and back on his feet.


"Definitely. With this being the same ankle that pretty much blew up before my rookie year really bad and missed almost a couple months with that," Smart said. "For me to be out of the boot and walking on it right now, two weeks from the injury is a good sign.

"This isn't my first ankle sprain and I know it won't be my last. We've just got to let it heal on its own, let your body do what it does.

"I wasn't as nervous just for the fact that it didn't feel as bad as the first one I did my rookie year. I kind of knew what it was, it was a sprained and I just thank God that it wasn't more. It was taped. That does help but obviously, as we've seen, even though you're taped, it still happened." (WEEI.com)

Smart hasn't wasted anytime rehabbing his injury. He's been working out, constantly on his feet during team practices and considers the two weeks off a precautionary measure.


"I'm feeling better. The swelling's going down," Smart said. "I've been in the training room, working with those guys and trying to help strengthen the ankle and get all the fluid out. It shouldn't be too long. But like I said, better safe than sorry."