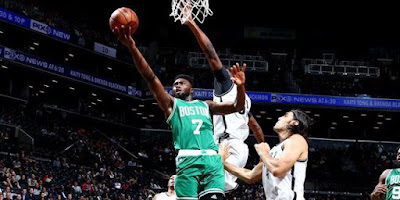 The Celtics reserves capped a 7-2 run in the final three minutes to push the C's to a 100-97 win at the Barclay Center on Thursday.

After the Nets grabbed a six-point lead in the fourth quarter, the Celtics stayed close behind throughout the final period before rookie Jaylen Brown (10 points, 3 assists) took matters into his own hands -- scoring four points in the final minute.

Brown earned trips to the free-throw line by slashing through Brooklyn's defense and getting to the rim and knocked down 4-of-4 from the charity stripe to give his team a 3-point lead in the final seconds of the game.

Al Horford was certainly the story of the first half -- where he scored all of his 13 points of the night and finished with 9 rebounds.

In what was his best outing of the preseason, Marcus Smart finished with a game's best plus-14 rating. Smart couldn't find his outside touch (0-for-4) but still managed to score 13 points and added 4 assists off the bench.

Both teams were chippy throughout the night -- giving the fans in Brooklyn a taste of what's to come when Celtics and Nets meet in Boston for their season opener on Oct. 26. But it was a tough shooting night for some of the starters.

Guys like Jae Crowder (0-for-5) and Avery Bradley (3-for-12) struggled offensively while Isaiah Thomas (4-for-12) picked up the slack. He finished with 12 points.

When Stevens turned to his bench in the second half, guys like Brown, Terry Rozier, Jonas Jerebko, Gerald Green and Jordan Mickey -- all finished strong. Rozier (10 points, 7 assists) took over as the playmaker and knocked down a pair of 3-pointers, Green finished with 9 points on 4-of-8 shots, Mickey (6 points, 6 rebounds) did the dirty work down low and Jerebko caught fire from outside the arc. He knocked down 3-of-4 from deep and finished with 12 points and 5 rebounds in 12 minutes.

Next up for the Celtics will be the New York Knicks at Madison Square Garden on Saturday.