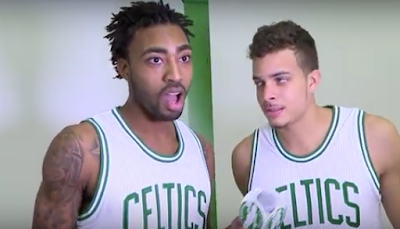 The hot ticket debate of the Celtics Preseason is over.

According to a report by CSNNE.com, on Monday morning the Boston Celtics waived former 2015 first round pick, RJ Hunter to trim the roster down to 15. This means James Young who was battling with Hunter all preseason for that final spot, has made the C's final squad.

The writing was on the wall that it was down to these two players. Hunter, who showed flashes in limited run last year, was considered a steal out of Georgia State when he was drafted No. 28 overall in 2015. Now, after one full season at the NBA, his time with the Celtics has come to an end.

Danny Ainge had a very tough choice to make when it came to these two players. Both were first round draft picks that really haven't gotten a chance to prove themselves at the NBA level. Hunter,who was considered more of a 3-point specialist, probably lost the position battle when it came down to versatility.

Young, who was viewed as a project when he was drafted came to camp with the added muscle and what seems to be a renewed energy on the defensive end. Brad Stevens loves size and versatility, especially defensively, so if I had to pin point why, this would probably be it.

Also, as surprising as it may sound, James Young is still only 21 years old. He was younger than Hunter (23), and has an extra year under Stevens coaching.

Ainge, had been trying to trade either for a second round pick in the proceeding weeks, but nothing was ever agreed upon.

Hunter will be missed, and surely he will be picked up somewhere else. We'll leave you with highlights of  his journey with the Boston Celtics.