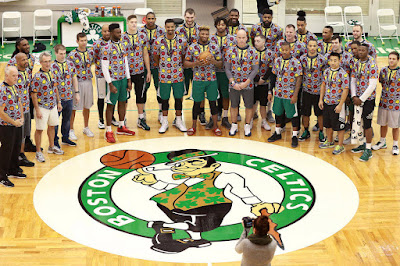 At the end of practice on Tuesday, the Celtics took a group picture wearing multicolored t-shirts that only TNT's NBA sideline reporter Craig Sager would approve.

Sager, who is currently battling leukemia, was honored by the Celtics in support of the SagerStrong foundation. Inspired by Sager's trademark look of multicolored suits, the Celtics players and coaching staff donned the t-shirts for the group photo and yelled "Sager strong."


TNT, Nike and the Golden State Warriors will be wearing t-shirts inspired by Sager before their season opener on Tuesday in support of the SagerStrong foundation.


"These are Craig Sager," said point guard Isaiah Thomas, referring to Sager's famously colorful sartorial style. "A guy that means a lot to this game of basketball. A guy who means a lot to the NBA, the NBA family. And we just wish him well, and we're praying for him and his family daily.

"The shirts are nice. They look like something he would wear. I wouldn't wear them but I know he would." [Boston Herald]

Sager was diagnosed with acute myeloid leukemia in 2014 and has continued battling his diagnosis. Shortly after receiving a bone marrow transplant from his son, Sager announced the leukemia returned this past March -- when doctors informed him he only has three-six months to live.

Teams across the league plan to pay homage to Sager as part of the NBA's 2016 opening night.