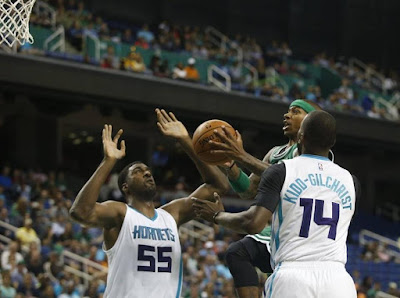 In their second preseason contest, the Celtics defeated the Hornets, 107-92, but will shift their focus on Isaiah Thomas -- who suffered a sprained left wrist in the third quarter and never returned.

Thomas got caught behind a screen by Hornets center Roy Hibbert and immediately left the game. Team officials are saying it's a "slight sprain."

Despite playing without Thomas, the Celtics offense erupted as they outscored their opponent 40-19 after halftime. Thomas led all scorers with 15 points, while Avery Bradley and Terry Rozier each finished with 14. Al Horford -- who was a game high plus-23 rating -- scored 13 points and grabbed 8 rebounds.

Much like they did in game one -- the Celtics grabbed a quick first-quarter lead (22-14) but their offense cooled off in the second quarter when the Hornets ended the half with a 51-43 lead.

Jeremy Lamb finished with a game-high 16 points (7-for-11 shooting), 10 rebounds and 4 assists off the bench for Charlotte, while Ramon Sessions added 11 points and Frank Kaminsky chipped in 10 points in the Hornets second straight loss.

The  Celtics went on a 23-4 run to begin the second half and led 66-55 midway through the third quarter.

Boston led by as many as 21 points and never let the deficit fall below 11 points on the way to their first win of the preseason.

Brad Stevens and company are now 1-1, and will look to make it two wins in a row when they take on Charlotte again on Saturday at Mohegan Sun Arena.