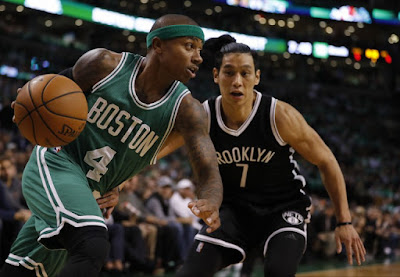 The Celtics looked like they would cruise to a double-digit win before a 23-point lead dwindled down to eight with 2:31 left to play. Brad Stevens immediately looked to his starters to come in and stop the bleeding, and Isaiah Thomas hit a pair free throws to seal a 122-117 victory against the Brooklyn Nets at the TD Garden on Wednesday night.

In a much anticipated season opener for Celtics fans, Isaiah Thomas picked up where he left off last April and finished with 25 points (game-high), 9 assists and 6 rebounds in 33 minutes of action.

“It feels great,” Thomas said. “We didn’t end it like we wanted to, but we definitely got the win and it feels good. To play in front of your fans and really get going and playing for something that counts.”

Jae Crowder finished with 21 points and 5 rebounds, Avery Bradley added 17 points, 9 rebounds and 5 assists while Tyler Zeller chipped in 13 points off the bench in the C's win.

Al Horford with 11 points, 6 assists, 5 rebounds and 4 blocks in 27 minutes, passed the eye test in his Celtics debut.

“It’s a relief more than anything,” Horford said. “[I’m] happy to finally get out there, start the regular season, I was proud of our guys and how we handled everything."

“It felt great, it’s a really good feeling just to think of the rich history here. I really do appreciate being here, so for me it was a lot of fun.”

With the Celtics up 112-87 with just over eight minutes left to play, three minutes later still up 19, Avery Bradley was the last of the starters to grab a seat on the bench assuming that "Gino" was shortly to follow on the jumbo-tron until the Nets went on a 18-2 run.

"We started shooting bad shots, and not guarding and throwing it to the other team," said Celtics coach Brad Stevens. "That's how quickly it can change, we all know that. I was hopeful not to have to put the starters back in, but I probably went a little bit longer than I normally would have."

The Nets cut the deficit to three (120-117) with 17.8 seconds left before a couple of missed opportunities by Justin Hamilton to tie the game, Isaiah Thomas was sent to the free throw line to ice it for the Celtics.

"That’s the NBA for you, it’ll humble you sometimes,” Horford said. “We had a comfortable lead, we thought it was fine, but it’s a good learning experience for our group, we have to keep playing the right way throughout 48 minutes.”

The Celtics will travel to Chicago on Thursday night for the first back-to-back of the season to take on the Bulls. Tip-off is at 8 PM ET on TNT

Celtics newcomers; rookie Jaylen Brown (19 minutes) and veteran Gerald Green (15 minutes) each pitched in 9 points a piece in their season debut. Brown was the first off the C's bench, while Green got a good reception from the Garden faithful when he checked in for the first time as a Celtic in over ten years.

Marcus Smart, who's still nursing an ankle injury, addressed the home crowd with a traditional season opening thank you