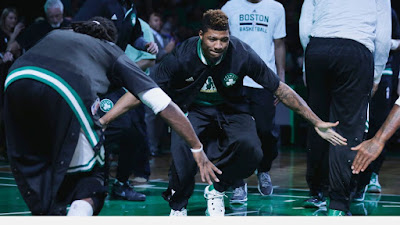 "I went through the full practice. The ankle felt great," Smart said. "I will be playing Wednesday, so it feels good to be back out here with those guys."

Smart, who sprained his ankle in the last game of the preseason, missed the first three games of the year for the Celtics.

This will be a huge boost for the Celtics' depth and strengthen the second unit considerably. Smart, who was looked upon to be the leader of the C's bench mob, will be welcomed back with open arms due to the lack of scoring and consistency we've seen from the bench so far this year.

The Celtics play the Bulls on Wednesday, which is the perfect game for Smart to return for. It's at home, which is always a plus for any player returning from injury. Also, for the C's it's perfect timing after getting burned by Chicago's three headed monster last week, they will probably ask him to defend Rajon Rondo, Jimmy Butler, and Dwayne Wade most likely throughout the night.

Celtics will take on the Bulls from the TD Garden on a national broadcast [ESPN], starting at 8 PM.