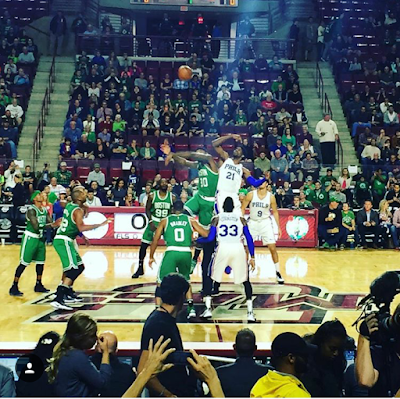 In a game where none of the Celtics starters played more than 20 minutes, the reserves came up short in the final seconds as the 76ers topped the C's in their preseason debut at the Mullins Center in Amherst.


Avery Bradley and Jae Crowder combined for 6-of-13 3-pointers and each finished with 11 points -- all scored in the first half. Al Horford had an impressive debut that started with a open mid-range jump shot in the first 12 seconds of the game. He did a little bit of everything for the C's -- he grabbed rebounds, scored in transition and his pick-and-rolls devastated the 76ers. Horford finished with 8 points, 8 rebounds and with a game-high plus-19 rating in 19 minutes.

His first block was against Celtics rookie Jaylen Brown and his first points was a thunderous dunk over center Tyler Zeller.

The Celtics held a double digit lead throughout much of the first half before the 76ers got their offense going in the third quarter and ended the game by outscoring the C's, 61-46 in the second half.

In his preseason debut, Brown demonstrated his best offensive weapons -- exceptional quickness, drives to the hoop and above-the-rim finishes. The first round rookie finished with eight points, four rebounds and four assists.

Brown made six straight points to pull the C's within two, including a high-flying loud dunk that erupted the crowd.

Terry Rozier also did most of his damage in the fourth quarter -- where he scored the majority of the team-high 12 points he finished with. In the final minute, Marcus Smart and Richaun Holmes traded baskets before Jordan Mickey cut to the basket for an easy dunk pulled the Celtics to within three points.

After Smart and Rozier's double-team forced a 76ers turnover, the Celtics came out of a timeout with a chance to tie the game at 92. Smart -- who couldn't find a clear pass to make -- settled for a step-back 3-pointer and missed with four seconds left but the C's stuck with their intensity on defense and forced another turnover.

In their second chance to tie the game,  with enough time for a catch-and-shoot attempt, Mickey back rimmed a 3-pointer as time expired.

The Celtics will continue their preseason schedule on Thursday night when they travel to Charlotte to take on the Hornets.