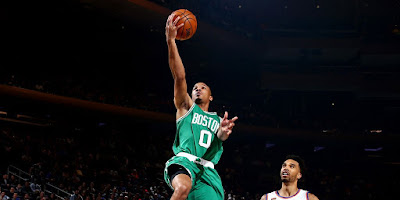 In what didn't feel like a preseason matchup, the Celtics' offense erupted by scoring 119 points in their final road game before the regular season.

The Celtics shot nearly 60 percent (58.9) from the floor en route to a 119-107 win over the Knicks. After holding onto a double-digit lead for most of the game, the Knicks cut their deficit to six points before R.J. Hunter went off in the fourth quarter -- where he scored most of his game-high 17 points on 6-of-8 shots, including 2-of-4 from deep.

Horford caught fire early as he knocked down his first five attempts in the first half -- including back-to-back 3-pointers -- and finished with 12 points and two blocks. Avery Bradley's 15 points on 7-of-9 shots led the Celtics' first-half surge. Both starters led the offense and helped the C's take a 59-50 lead into the half.

After the break, Marucs Smart (13 points, 3 steals) carried the momentum while most of the starters cheers from the bench. So far, Smart is shooting 70 percent (14-of-20) from inside the 3-point arc throughout the preseason. He may not be knocking down shots from deep but he's been very consistent from the mid-range and continues to be a force on defense.

In what was a regular-like atmosphere at Madison Square Garden, the Knicks erased their double-digit deficit in the fourth quarter before the Celtics put together a late-game run to close out the win and silenced the rawcus New York crowd.

Horford's presence continues to impact the Celtics' offense as their best shooter in Bradley had plenty of opportunities to knock down open shots against the Knicks. Horford and Bradley's great shooting and strong defense -- one that forced 20 turnovers -- set the tone on both ends of the floor as the C's dominated throughout most of the game.

Hunter -- who's believed to be on the bubble for making the team's final 16-man roster -- certainly made a case for himself in what may have been his best outing as a member of the Celtics. The second-year guard not only knocked down a pair of 3-pointers but also drove against the defense, got to the hoop and to the free-throw line.