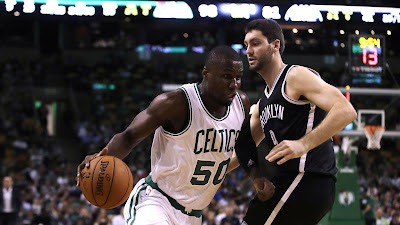 The Celtics are one move away from reaching the 15-man regular season roster limit.

After waiving Jalen Jones, Damion Lee and Marcus Gerorges-Hunt on Thursday, the C's released Providence standout Ben Bentil on Friday -- trimming their roster down to 16. If the Celtics hope to sign Bentil to a spot with their D-League affiliate, Maine Red Claws, he's going to have to clear waivers.

However, Ainge doesn't see Bentil exploring that option with the Celtics' organization.

"I think that Ben will look for other opportunities," Ainge explained. "We're so loaded at that position with Jaylen [Brown] and Jae Crowder and Kelly Olynyk and Al Horford ... we have a lot of guys that play the four [power forward] position. I think he might want to look somewhere that has more of an opportunity." [CSNNE.com]


Ainge went on to add:


"Ben was great. He had great energy, great enthusiasm from the day he showed up here. Had a great attitude. We love Ben We're rooting hard from him to have success and I think he will." [CSNNE.com]

According to Adrian Wojanrowski of The Vertical, the Celtics are seeking a trade for a second-round pick in exchange for either James Young or R.J. Hunter in an effort to reach the 15-man max.


If the Celtics can't find a team to make a trade with, they will be forced to release Young or Hunter before Monday's deadline.

Photo used is courtesy of the Boston Globe