Vincent Poirier out for six weeks with fractured finger 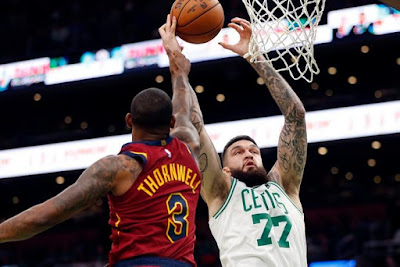 For a team that was hoping its extended rest would help its injury-plagued roster, the Celtics delivered more bad news Tuesday.

After learning second-year center Robert Williams III (hip edema) will be out for at least three more weeks, the Celtics announced Vincent Poirier is expected to miss up to six weeks. Poirier fractured his right pinkie finger in practice Monday and will require surgery.


#NEBHInjuryReport Celtics center Vincent Poirier suffered a fractured right pinkie finger during yesterday’s practice. The injury will require surgery and he is expected to return to play in approximately six weeks. Further updates will be provided as appropriate.
— Boston Celtics (@celtics) December 17, 2019


Despite Poirier playing only 44 minutes through nine games so far this season, it appeared the French big man was going to get some more playing time before this latest injury.


"It's too bad," said Celtics coach Brad Stevens. "He was doing really well, and with Rob (Williams) out, he was gonna get a chance."

Stevens is going to have to rely heavily on Enes Kanter, Daniel Theis and even rookie Grant Williams, as the Celtics frontcourt is growing thin what seems like by the day.

Boston could always call up Two-Way center Tacko Fall from the Maine Red Claws of the NBA's G-League. Fall was last called to the main roster against the 76ers, but did not play due to a coach's decision in the Celtics 115-109 loss to Philadelphia at TD Garden this past Thursday.

Fall, who's averaging 13.6 points on 67-percent made baskets, 9.3 rebounds and 2.5 blocks off the bench for the Red Claws in eight games, has only appeared once for the Celtics this season in a blowout win over the Knicks at Madison Square Garden back in late October.

After having five days off, the Celtics face the Mavericks in Dallas on Wednesday night and come back to Boston for two more home games against the Pistons and Hornets (Terry Rozier's TD Garden return), before heading up north for their Christmas Day showdown with the Raptors.

The next several weeks could be crucial for the young guys in Fall and Williams to possibly get some much needed experience.