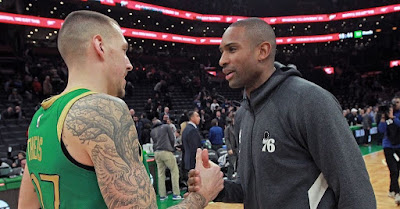 Al Horford got a warm reception in his first return to TD Garden as a member of the Philadelphia 76ers Thursday night.

While Horford sat out with a sore knee and hamstring tightness, he did receive a standing ovation from Celtics fans when shown on the jumbotron, as the Sixers beat his former team 115-109.


Despite Horford playing only three seasons in Boston, Joel Embiid's 38-point performance reminded Celtics fans why they may miss the former C's big man down on the block matching up against the likes of the NBA's best centers.

Horford not only was shown appreciation from the Celtics fans, he also got some love from some of his former teammates like Jaylen Brown prior to Thursday game. A nice picture of Horford was seen hanging outside of the Sixers' locker room hours before tip-off.


The Celtics welcomed Al Horford back with this photo.