Celtics bigs solid against the Sixers, needed one slight adjustment 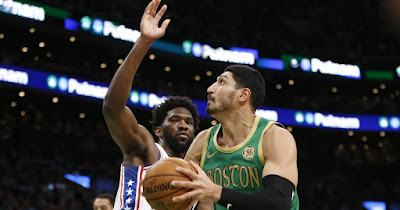 Joel Embiid was obviously motivated by criticism from TNT's Charles Barkley and Shaquille O'Neal, as he went on a rampage, scoring 38 points, grabbing 13 boards and handing out six assists. But it was matched by Boston's center pairing of Daniel Theis and Enes Kanter on both ends of the floor.

Kanter and Theis combined for 36 points and 14 rebounds, while shooting 17-of-24 from the field (70.8 percent). Kanter focused on defending Embiid, and he was able to match Embiid's physicality. The Sixers star big man ignored both Theis and Kanter with Boston on the offensive attack, and they took advantage of it. Kanter was 10-of-13 from inside the paint and mid-range, while Theis was 7-of-11 from everywhere, including 1-of-2 from beyond the arc.

Despite the great shooting, there was a slight adjustment that needed to be instituted when it came to the offensive end. Theis admittedly has had trouble battling the big brutes down low, but he is a decent 3-point shooter, and he needs to take more of them. Last season, Theis hit 26-of-67 3-point shots, which translates to 39 percent accuracy. In his last five games, he has connected on 5-of-8 three-pointers for a 62.5 percent clip.

Embiid was seen constantly basket-hanging and allowing Kanter and Theis to put up shots at will from distance. It only makes sense, that if Thies couldn't handle Embiid inside on defense, the German big man needed to force Embiid out to the perimeter whenever he could on offense.

While Embiid may be the toughest cover in the NBA for rival centers, Theis and Kanter both had a great outing against him. Had Marcus Smart been available (eye infection), he would have made the difference in this contest, especially down the stretch. His disruption on the defensive end would have thrown a wrench into Philadelphia's relentless offensive attack. That's how important Smart is to this Celtics roster.