Why rookie Grant Williams should be a regular in Celtics' rotation 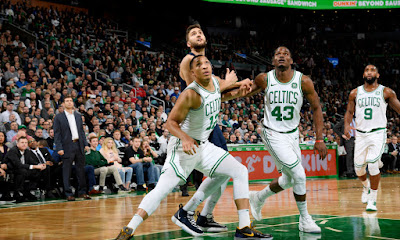 Celtics rookie Grant Williams has been carving out a role these days for Brad Stevens, while others like Semi Ojeleye have had their minutes cut. As coach Stevens continues to build his bench, this may have implications for the remainder of the season, despite current injuries in the frontcourt.

Ojeleye is only averaging about 7.5 minutes in the three games prior to the Celtics loss to the Raptors -- where he received a coach's decision DNP -- while putting up 1.7 points, 0.3 rebounds, 0.7 assists with a plus/minus rating of -8.3. Ojeleye, who is normally playing about 15 minutes a game for the season, has been the most affected when it comes to the recent emergence of Grant Williams.

Williams as of late, especially in the last four games is putting up 6.0 points, 2.3 rebounds, 2 assists and a plus/minus of +15.3. G-Will also ranks second in the NBA in defensive rating for players that have playes 20-or-more games and logging 14-or-more minutes per contest.


Grant Williams missed the first 25 3-pointers of his NBA career and entered Friday with just 52 points all year. Then he erupted for 18 in one night. “He’s got a bunch of teammates that are cheering him on every step of the way.” https://t.co/kPoTf0PtOv
— Adam Himmelsbach (@AdamHimmelsbach) December 21, 2019


Although this may be a temporary lineup adjustment, Stevens may be taking a look at just how high a ceiling Williams can achieve. Taken with the No. 22 overall pick in the 2019 NBA draft, the Celtics rookie has shown himself to be poised and confident on the floor. At 6-foot-6 and 240 pounds, Williams lacks high-level athleticism but makes up for it with his deceptive quickness, basketball IQ and versatility. The 2-time SEC Player-of-the-Year checks a lot of the boxes required from Boston's bench, and Stevens may feel Williams is as equal to Ojeleye's defensive prowess by season's end, while also producing more points, rebounds and assists.

Also at issue here is the possibility that Danny Ainge may want to bring in a free agent or buyout candidate prior to the post-season. And as always with Ainge, a trade could happen. Any such move could mean waiving a current player from the roster, and that player could be Ojeleye. He earns $1.6 million this season, and his $1.8 million for next season is not guaranteed.

After Williams breakout game against the Pistons nearly 10-days ago, in which he scored 18 points on 8-of-10 from the field and 2-of-3 on treys, Stevens may think his rookie has a lot more of those performances in him. Look for Williams to continue logging minutes in the high-teens, as Ainge may have hit the mark with his choice for that 22nd pick in last summer's draft.