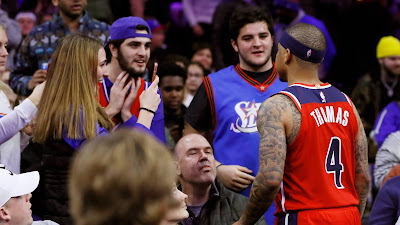 The game between the Philadelphia 76ers and Washington Wizards had already been decided on Saturday night, when former-Celtic Isaiah Thomas missed his first free throw attempt but made the second late in the fourth quarter.

After a timeout was called, Thomas calmly walked into the stands to confront a 76ers fan who allegedly had yelled obscenities directed at him while at the free throw line.


A brief discussion between Thomas and the offending Philly fan ensued with no physical contact. Thomas was then ejected from the game for purposely entering the stands, and two fans were escorted out of the arena.

According to Thomas, he indicated that the fan in question displayed two middle fingers and yelled "F**k you, bitch" at him several times, while running back following the made free throw. The offender offered an apology and explanation that his actions resulted from losing out on a dessert promised to 76ers fans when an opponent misses two free throws in a row.


"I said: 'Don't be disrespectful. I'm a man before anything. Be a fan.' His response was, 'I'm sorry, I just wanted a Frosty,'" Thomas explained.

Should Isaiah Thomas be punished further after going into the Philadelphia stands to confront a disrespecting fan?


Philadelphia went on to win the game 125-108, but the question now remains as to what action the NBA may take against Thomas. Although no physical altercation took place, and the verbal confrontation was amicable, but it could have been a lot worse.

The NBA has taken a firm stand on its players entering the stands ever since "The Malice at the Palace" fiasco in 2004 between the Pistons and Pacers. Indiana's Ron Artest aggressively confronted a fan, after a beer was tossed on him at the Palace at Auburn Hills in Detroit and all hell broke loose. Artest was suspended for 72 games (the remainder of the season), and other Pacers and Pistons players were suspended for as many as 30 games.

It seems certain that Thomas will receive some type of punishment for his infraction in the form of a fine and or a one-game suspension. Security was present almost immediately, which may have played a role in the incident not escalating.

ESPN reported that 76ers officials acknowledged the fans making inappropriate gestures and language toward Thomas, which is a violation of Wells Fargo Center policy. According to a Sixers' spokesman, the season-ticket holder for those seats has been banned for a year and will receive a refund for the remaining games.

In October, the league put in place a zero-tolerance policy for abusive or hateful behavior of fans, following incidents during the 2018-19 seasons involving players like Russell Westbrook, DeMarcus Cousins, Kyle Lowry and many others.