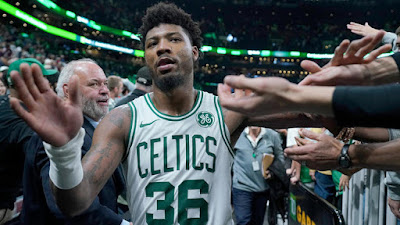 Marcus Smart plays only one way - all out, and his Celtics teammates and fans love him for it, but it may have a price down the road.

Diving on the floor for loose balls, taking charges, battling much-bigger opponents under the hoop, that all takes a toll, as Smart will be out of out of action with an illness when the Celtics host the Miami Heat Wednesday night, according to team officials.

Smart, who has already accumulated an assortment of injuries after just 19 games, suffered an abdominal contusion during the Celtics 113-104 win over the Knicks Sunday afternoon attempting to take a charge on 6-foot-7 forward Kevin Knox.

Hall-of-Fame big man and Celtics legend Dave Cowens followed a similar path five decades ago when he came into the league in 1970. At just under 6-foot-9, he battled much bigger centers and backed down to no one. And he took a beating doing so during his NBA career, which only lasted 10 seasons before retiring in 1980.


"I have sprained my ankle at least 30 times over the duration of my career, broken both legs and fractured a foot," Cowens said upon retiring. "Two years ago, a team of foot and bone specialists said they were amazed that I could play up to that point without sustaining serious injuries." [Celtics Blog]

The 1973 NBA MVP came out of retirement two years later to play with the Milwaukee Bucks during the 1982-83 campaign. However, Cowens would go on to retire for good after he sustained an injury in the last game of the regular season and sat out the playoffs.

Celtics great John Havlicek says "No one ever did more for the Celtics than Dave did," when it came to his teammate Cowens. [Celtics Blog]

Smart, who is 6-foot-3, has the same bulldog mentality on the hardwood, as his injuries keep piling up. Now in his sixth NBA season, and Smart will sit out for the first time this year. Often called the heart and soul of his team, Smart simply fills any role offered to him, and many that are not. He does it all without complaint.

Here's to hoping Smart plays as long as he wishes with no series of injuries shortening a career that gets brighter every season.