Marcus Smart (illness) to play against the Denver Nuggets 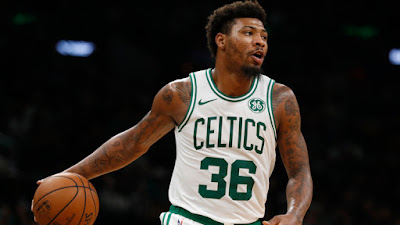 Marcus Smart, who sat out of the Celtics 112-93 win over the Heat on Wednesday with an illness, will return to the lineup tonight against the Denver Nuggets at TD Garden.

Smart also suffered an abdominal contusion in the team's win over the Knicks at Madison Square Garden last weekend, but has only missed one game so far this season.


"I plan to play tonight," Smart told the media Friday morning after shootaround.

Smart added: "The oblique injury is feeling a lot better. Still sore, but the soreness is at a lower level. It really hasn't stopped me with my movements."


Despite Smart guarding all positions, especially opponents much taller than he is, the Celtics guard plans to ease his way back tonight when the team host Nikola Jokic and the Nuggets.